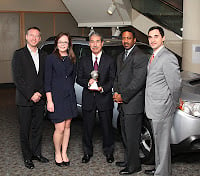 The best thing about Subaru's "Baby Driver" ad is that you don't even know what model Subaru is being advertised.

How many car commercials have you seen in which, at the end of the commercial, you don't actually know the name of the car? Your answer, if you have seen "Baby Driver," is probably "one."

So, why did Subaru do this? Why did they "break the rules of advertising"?

We were lucky enough to get the answer straight from the folks at Subaru last week when we presented them with a Fatherhood Award for their great work on "Baby Driver."

What they told us is that they wanted to focus on the relationship between the father and daughter in the ad (who happen to be a real life father and daughter!), and not on the specifics of the car. They were more interested in face-to-face than cargo space.

And that is why we gave Subaru a Fatherhood Award. Too often, father-child relationships are reduced to punchlines on TV. Subaru decided to show real life fatherhood - dads who care about the safety of their children and "live life deeply" with them.

We are hopeful that more and more companies will follow Subaru's lead. They have good economics reasons to - new research is showing that dads are becoming more and more involved in family purchasing decisions. When dads are portrayed well, everyone wins - dads, moms, kids, and the company's bottom line.

Bravo to Subaru for such a great ad that sends such a great message... After all, "Love" is what makes a Subaru a Subaru.