Posted by Christopher A. Brown February 23, 2021
How Fatherhood Programs Can Get into the 2Gen Game
One the most recent and fastest-growing efforts to strengthen families are two-generation (2Gen) programs and... END_OF_DOCUMENT_TOKEN_TO_BE_REPLACED
Posted by National Fatherhood Initiative February 16, 2021
After jail: DeAndre McCall's fatherhood awakening
Posted by Christopher A. Brown February 9, 2021
What 713 Dads Say About InsideOut Dad® Provides Further Evidence for Its Effectiveness

Men at Work: Time and Turf Wait for No One 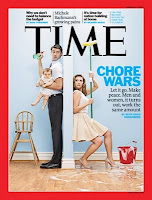 Husbands across the country can celebrate  Time magazine has printed (on its cover no less!) that married men and women do the same amount of work each day! (Chore Wars, 8/8/11)

This assertion is based on new U.S. Bureau of Labor Statistics data that shows that when you combine paid (your job) and unpaid (child care and housework) work, married moms work only about 20 minutes more per day than married dads do, the smallest difference ever reported (in childless couples, men actually work - paid and unpaid - 8 minutes more per day than women!).

While it has become popular for women to air their grievances about their lazy husbands and for the culture to permit them to do so, I think this data is not surprising to most people (is it?).

As the article points out, when mom comes home and starts her second shift of caring for the children, it is because dad is still at work working.

In other words, just because dads first shift is longer than moms does not mean she is working more. She is working differently and, as most people also understand, she is often doing so by choice. As the writer of the story -- a working mom -- points out, she is exhausted by all the work she has to do because she decides to go home earlier than her husband does, and thus is the one who faces the children and messy house first.

But enough with the data. What is really going on here? Why do moms still feel overwhelmed?

A few of us at NFI have long asserted that the reason moms feel overwhelmed is that they have a powerful desire to be the lead organizer/scheduler/chauffeur/referee/cook/etc in the home, regardless of how much they work, and they often do so at the expense of dads involvement. Sharon Meers, in her book Getting to 50/50, writes extensively about this.

So, while dads have had to make room in the workplace for moms, moms have not been expected to (nor have they often been willing to) make room for dad in the home to the same extent. Clearly, out of necessity, working moms have had to allow dads to get more involved, but the fact that women still feel overwhelmed is a testament to the idea that they sometimes cant let go of their traditional dominion over all things domestic.

So, really, the debate is no longer about time, but about turf -- and moms want to retain their home turf advantage.

This leaves dads in a transitional space in which they are expected to do a little more at home (but not too much!), and still be full partners at work. Thus, we have dads feeling even more work-family conflict than moms do! (see the Time article)

So, while it is helpful to have data that shows that dads are not slackers, we still have a problem to solve: how can we help moms feel more comfortable ceding some of their home turf to dads?