May 31, 2011
Share
Two weeks ago, my father-in-law passed away unexpectedly from heart failure. My wife is terribly saddened by the loss of her dad, who was only 52 years old. I am certainly sad in my own right, as I will miss my father-in-law. But much of my sadness stems from how his passing will affect other people, especially my wife and our son.
My father-in-law, who went by Meco (his real name was Arquímedes), was a very loving and fun-loving man. My wife, Claudia, has been telling me how his childhood was not all that great because his parents were not very affectionate people  they did not show their children much love. So, my father-in-law decided that when he had children, he was going to be different than his own parents. He was going to make sure his kids knew every day how much he loved them.
He made good on that promise - he used to call my wife nearly every day just to see how she was doing, and he would always ask about everyone else  me, our son, my parents, even my dog. My wife has told me several times since his passing how much she misses his hugs and kisses and him simply saying, I love you to her.
Meco was also the kind of guy who never said no to anyone who needed help. In fact, his immediate family would often get frustrated that he spent so much of his time, energy, and even money lending a helping hand (or two, or three!) to friends and extended family in need.
It was easy to predict that a man with so much zest for life and love of family would also be a very proud grandfather. He would often joke with my wife when she was only in her early 20s that she was getting old and needed to give him grandkids soon. To say the least, he was elated when our son, Vinny, was born last January. Other than my wife and me, he was the first family member to hold our son. The pictures we have of him on that day are priceless; he was on cloud 9.
In fact, only 4 days before he went into the hospital (6 days before he died), Meco took Vinny on a long walk  just him and his grandson. One of my wifes cousins saw him across the street from his house, walking Vinny in his stroller. He asked him, What are you doing by yourself out here with Vinny? Meco replied, I just wanted to spend some time with him.
This is what causes me the most sadness when I think about Mecos passing  that my son will not get to know his mommys daddy. It breaks my heart to think of all of the wonderful times that they wont get to spend together. I know they would have had so much fun (and made a lot of trouble!).
But my wife and I will do everything we can to make sure Vinny knows what kind of guy his abuelo (Spanish for grandfather) was. That he was a man who truly loved his family and lived his life for them.
And I will be proud to tell my son one day that one of the last things your abuelo did while he was still with us was to take you for a nice, long walk because... well, he just wanted to spend some time with you. 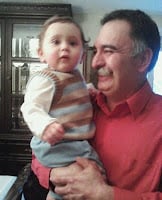 Vinny with his grandpa, Meco