Posted by Christopher A. Brown April 6, 2021
How to Help Dads with Depression
Do you work with dads who have experienced depression? If so, some exciting research has emerged on how the development... END_OF_DOCUMENT_TOKEN_TO_BE_REPLACED
Posted by Christopher A. Brown March 23, 2021
Have Dads Stepped Up During the Pandemic?
Posted by Ave Mulhern March 16, 2021
Paving the Way for Fathers to Understand Their Prerogative

How quickly things can happen It was the night of Sunday, March 28th and my wife (Kelly) and I went to bed getting ready for another week. We were nearing the due date of our second child and little did we know that he would come that very night. Kelly woke me up around 12:30am to let me know that she was having some contractions. However, I didnt think much of it as she had been having sporadic ones over the course of the past couple of weeks. So, not convinced that this was the real deal, I quickly fell back asleep. :) About 30 minutes later I was awoken from a deep sleep to the sound of Im not kidding you. Hearing the tone in my wifes voice, I sprung to action. We scrambled throughout the house; the contractions were coming faster and faster each time, and increasing in intensity. It really felt like a scene out of a movie.
After arriving at the hospital, we learned that Kelly was pretty far along and that she would likely start pushing in 10-15 minutes. After hearing all of these things and trying my best to help Kelly with the breathing techniques, I almost did the stereotypical thing and pass out in the delivery room. However, after I sat down and caught my breath, I was able to pull it all together to be there for my wife. (Needless to say, I will never again look down upon guys who actually do pass out in the delivery room.) When the big moment arrived with that final push (4:26am), I had the privilege of welcoming our son into this world by being the first person to say his name: Joshua. Prior to that moment, my wife and I did not know whether we were having a boy or a girl. (an intentional decision on our part) It was such a joy to hold Joshua for the first time. During that precious moment, I took the opportunity to verbally affirm to him that I will always be in his corner and by his side. Thats a commitment that is sealed in my heart, just like the one I made to my first son Caleb and the vows that I made to my wife on our wedding day. I have great hope for my children and believe that God has big plans for their lives. As their father, I believe it is my responsibility to see this belief and desire become a reality. And that is not something that I take lightly Now that Im back at work after two weeks of paternity leave, my commitment to the National Fatherhood Initiatives (NFIs) work is as strong as ever. My passion for NFI is fueled by my desire to see more and more fathers throughout the country make lifelong commitments to their children. While seeing this type of societal change can at times be an uphill battle, its a mountain worth climbing 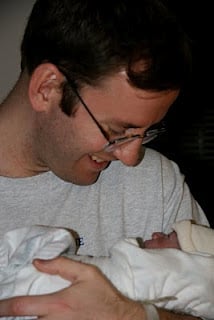 Mike and his son, Joshua.