Posted by Erik Vecere January 21, 2021
13 Lessons and Takeaways to Engage Your Stepdads
If I had a time machine, I would travel back to May 3, 2018, the day before I became a stepdad to four wonderful girls.... END_OF_DOCUMENT_TOKEN_TO_BE_REPLACED
Posted by National Fatherhood Initiative January 12, 2021
Showing Up for Fatherhood [An Awesome Podcast featuring NFI President Christopher Brown]
Posted by National Fatherhood Initiative January 6, 2021
Wyoming Pregnancy Help Center Sees Stronger Father Involvement Thanks to Technology

Father’s Day Is For Fathers: Why WIRED ‘Gets It’ and Others Don’t 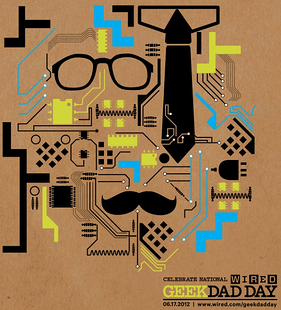 Since WIRED’s June cover for National Geek Dad Day released, some folks have been buzzing about whether the tech magazine is singling out dads too much. NFI praises WIRED for celebrating dads and encouraging intentional time with their kids. The haters just don’t get it.

The current issue instructs dads on "How to be a Geek Dad," by building hovercrafts, making electric play-doh, building forts with broomsticks and string, and basically being the coolest, most amazing dads ever.

But some aren’t happy with Geek Dad Day. Specifically, Katie J.M. Baker at Jezebel writes an article titled, “Wired Magazine Can’t Seem to Stop Alienating Women” and thinks the magazine shouldn’t single out and celebrate men, even on Father’s Day.

After Baker complains about the number of female contributors and lack of features written by women at WIRED, she asks, “shouldn't a magazine that markets itself as a general interest publication know better?” Sadly, Baker is fighting her battle on the wrong day in the wrong way.

Father absence is a real problem – it matters. Twenty-four million children in America -- one out of three – don’t have dads in the home. Father absence is linked to poverty, crime, teen pregnancy, and education. Whether a father is absent or present impacts society – for good or for ill.

The father factor in education is one such example. The National Center for Education Statistics says half of all children with involved fathers reported getting mostly A's through 12th grade, compared to 35.2% of children with absent fathers. Any effort encouraging dads to “Grab your safety glasses and your kids…” is worth applauding, especially around Father’s Day.

Do we not celebrate what we want more of, like birthdays and anniversaries? If we want more good dads, we should celebrate them. Father’s Day is not the day to debate gender issues, it’s a time to celebrate dads.

Given the dramatic need for more and better dads, we should celebrate any effort encouraging dads to be engaged with their kids; especially when we see plenty dumb, ineffective and disengaged dads every other day of the year in media. On the other hand, mothers are generally portrayed as competent parents. (Of note, we have not seen Baker address this clear inequality.)

Baker writes that WIRED’s idea of exploring science is great; she only wants it to be for all parents, not just dads. She asks two questions, “Why does it have to be marketed towards dads?” and “Why do publishers seem confused that "girls can geek out too?” Baker continues, “Adult women can geek out, too, which is why covers like these piss off some of the magazine's female fans.”

Baker criticizes WIRED for not engaging all parents; but do we not see fathers missing from media every day of the year? Plus, good fathers are a benefit to mothers. When we celebrate fathers we are helping mothers. Specifically, 93% of mothers agreed (67% strongly agreed) that there is a father absence crisis in this country (see Mama Says).

I disagree with Baker when she writes that the current issue of WIRED should “piss off” women. Of course we need more "geek women." But, getting fathers involved will actually create more geek women. Geek fathers have sons AND daughters. Geek fathers have a unique opportunity to mentor their daughters. Research shows girls with involved fathers score at significantly higher levels than those without fathers (See Father Facts).

The Geek Dad issue of WIRED encourages dads to grab safety glasses and their children, we applaud WIRED and encourage more companies to be creative with involving dads in the lives of their children.

Pass me the safety glasses. If being a Geek Dad is wrong, I don’t want to be right.