Posted by Erik Vecere January 21, 2021
13 Lessons and Takeaways to Engage Your Stepdads
If I had a time machine, I would travel back to May 3, 2018, the day before I became a stepdad to four wonderful girls.... END_OF_DOCUMENT_TOKEN_TO_BE_REPLACED
Posted by National Fatherhood Initiative January 12, 2021
Showing Up for Fatherhood [An Awesome Podcast featuring NFI President Christopher Brown]
Posted by National Fatherhood Initiative January 6, 2021
Wyoming Pregnancy Help Center Sees Stronger Father Involvement Thanks to Technology

Our 2012 Military Fatherhood Award recipient had a big day yesterday! 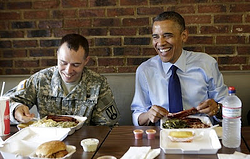 Obama lunched with two serviceman and a pair of local barbers involved in the administration's campaign to promote better fatherhood.

"These guys are also young fathers, and they're doing great," Obama said during the lunch at the BBQ smokehouse in northeast Washington.

Watch video of the lunch here:

President Obama does well to point out that involved fathers matter. Absent fathers change everything. From incarceration and crime to teen pregnancy and childhood obesity (See Statistics on Father Absence).

Edwards is an example of an involved father. Lt. William (Bill) Edwards of the U.S. Army is the 2012 Military Fatherhood Award Winner.

Edwards is based at Fort Jackson in South Carolina where he lives with his wife of 13 years, Esther, and their four children. Lt. Edwards uses his musical and cinematic talents to stay connected with his four children before, during, and afterhis deployments. He was deployed with the 3rd Infantry Division Band in 2007-2008 for 14 months in Iraq.