Posted by Christopher A. Brown October 19, 2021
Use this Exercise to Address Gendered Parenting
In your work with parents, do you address the ways in which dads and moms interact with their sons and daughters... END_OF_DOCUMENT_TOKEN_TO_BE_REPLACED
Posted by National Fatherhood Initiative October 12, 2021
My Brother’s Keeper of Greater Richmond Provides School Backpacks on Behalf of Incarcerated Dads
Posted by Christopher A. Brown October 5, 2021
This One Tactic Could Boost Retention in Your Fatherhood Program

The Night My Son Came Home With Diabetes

Last Thursday night at around 7:30, my wife and I took our two-and-a-half year old son, Vinny, for a walk. It was a beautiful night, warm with a cool breeze. The sun was just starting to set.

We approached the neighborhood playground and Vinny asked to get out of his stroller so he could go play. His chubby little legs carried him over to the slide, which he promptly climbed and slid down.  He was having a blast.

As twilight progressed, the evening took on a magical quality. The air had a golden glow, the fireflies were coming out, and a few stars began appearing in the sky.

I stood next to one of those spiral slides as my son started to climb it. As he came around the bend, he saw me standing there and a big smile came over his face. He said, “Daddy? Daddy?” I answered, “What is it, baby?” He sat down right next to me and looked me in the eyes, still smiling. He just wanted “Daddy,” not something from Daddy.

Under normal circumstances, this would have been a great moment for me as a dad. But that night, it became a “remember-forever” moment that almost made me break down in tears. Because just an hour earlier, my wife and I had left the hospital after a three-day stay in which my son was diagnosed with Type 1 Diabetes.

Let’s rewind back to last Tuesday. It had been at least a week during which my son was barely eating, was always thirsty, was constipated, and was wetting his diapers like never before. He was usually in a bad mood. It had really hit me that something was wrong when he was lying down on the changing table and I could see his ribs protruding.

So, I took him to the doctor that morning to see what was going on. They began doing a series of routine tests to see what was wrong. One of those “routine” tests was a blood sugar test that returned a result of 565. 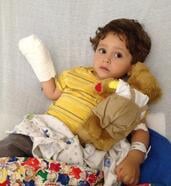 This was when I heard “the word” for the first time. Diabetes. You know, that disease that your Aunt Bertha takes pills for because she’s eaten a few too many of her own apple pies. But in a healthy two-year-old?

At that point, our doctor told me that I should take Vinny to the emergency room so they could do some tests to confirm whether or not it was diabetes. I called my wife, and we met at the hospital 20 minutes later.

After a very short period of time, he was admitted and the diagnosis was confirmed – Type 1 Diabetes. The kind of diabetes that you just “get” and does not go away. The kind where you have to do blood sugar tests and insulin shots every day for the rest of your life.

My wife and I were in shock. It sounds cliché, but we really did not know how to react.

But the doctors were amazing. They immediately began preparing us for the new routine we would have to establish every day with our precious son. We learned carb counting, blood testing, and how to administer insulin shots.

By Thursday night, our new endocrinologist was comfortable enough with where we were in our knowledge and where Vinny’s blood sugar was to let us go home.

I can’t remember ever being so nervous in my life.

We were leaving the security of the hospital and left on our own. What if his blood sugar dropped and he passed out? What if his blood sugar spiked and something terrible happened? My wife and I never paid so much attention to our son’s mood, facial expressions, complexion, and demeanor in our parenting lives… But that is where the magic came from…

One of the best pieces of advice the nurse gave us as we left the hospital was to handle everything in a matter of fact way so that our son wouldn’t get upset. So, to ease our nerves, we went for that walk to the playground where he, in his own little 2-year-old way, showed his affection and appreciation for daddy.

I believe children are wired to crave connection with their parents – God makes them that way. My wife and I both work full time. We spend a lot of time with our son, but never three straight days, 24/7, in the same small room, playing with him, feeding him, reading to him, watching Disney movies together. While our stomachs were churning about his new disease, he was delighting in the fact that mommy and daddy were spending so much time with him.

So when we went for the walk, he was as happy as can be. He didn’t know that mommy and I were bundles of nerves. He just knew we were there, and he loved us for it.

The next few months are going to be tough. We are going to continue adjusting to the reality that our son has an incurable disease that needs constant management. But the silver lining – which I learned about on the playground that night – is that I will become closer than ever to my little boy. And every time he smiles at me, I will thank God that I have been given the opportunity to be the daddy to this wonderful boy, diabetes and all.