What Was Missing in Sandusky Case? Fathers 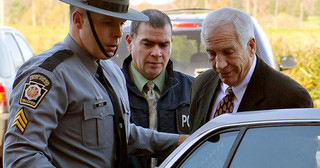 Jerry Sandusky was found guilty of 45 counts of sexual abuse a week ago. Despite the verdict, important questions should continue to be asked. Why didn’t the assistant football coaches do something? Why didn’t the school administration do something? But the biggest, most pointed question is, “How in the world was Sandusky able to prey on so many young boys for so long?”

From our perspective, Sandusky would not have been able to do what he did had he not had access to so many boys growing up in father-absent homes.

Ronnie Polaneczky of the Philadelphia Inquirer brings up this point in her column, Sandusky case underscores importance of fathers. She asks, "What if so many of Sandusky's victims hadn't needed father figures in the first place?" She answers her own question: “This never would've happened.”

Sandusky intentionally surrounded himself with children from homes that didn’t have involved fathers by starting a foundation, The Second Mile, dedicated to helping boys from “disadvantaged” homes.

Polanecksky writes, “I'd bet my own dad's hypertension meds that Sandusky never would've groomed those Second Milers for sex had the children had active fathers whose wrath Sandusky might've feared.”

Of Sandusky's known victims, six had no father in their lives and three admitted to never having known their dads. On the witness stand, many of the boys said they thought of Sandusky as the father they'd never had.

One boy said, he (Sandusky) "treated me like a son in front of other people.” Another victim testified, "I looked at Jerry as kind of a father figure...I didn't want to lose somebody actually paying attention to me."

NFI understands children have an innate need for their fathers’ affirmation and attention. “Children have a hole in their soul the shape of their fathers,” says NFI President Roland Warren. And we know from decades of research that fathers matter. Whether a father is in the home and involved or not changes just about everything – for good or ill.

Sadly, folks like Sandusky know this and prey on children with absent fathers. Like drug dealers or gang leaders, they exploit what they recognize as a weakness or vulnerability in a child craving adult male attention.

To note, this is what DC sniper Lee Malvo said about how John Muhammad caught him up in his web: “Anything he asked me to do I'd do. He knew I didn't have a father. He knew my weaknesses and what was missing.”

We also know through social science research that children from father-absent homes are far more likely to suffer physical and sexual abuse than those growing up in two-parent families.

Economics will not fix this problem. Needy children exist in wealthy homes, too. Only a society willing to educate and train up a generation on the importance of fatherhood can change this problem.

In other words, we need to get to the root by asking the most-pointed question more often: “Why were these kid’s victimized?” More often than not, the answer is going to be because their fathers weren’t there to protect them physically and emotionally.