Posted by Christopher A. Brown April 6, 2021
How to Help Dads with Depression
Do you work with dads who have experienced depression? If so, some exciting research has emerged on how the development... END_OF_DOCUMENT_TOKEN_TO_BE_REPLACED
Posted by Christopher A. Brown March 23, 2021
Have Dads Stepped Up During the Pandemic?
Posted by Ave Mulhern March 16, 2021
Paving the Way for Fathers to Understand Their Prerogative

The Father Factor in the Aurora Shooting 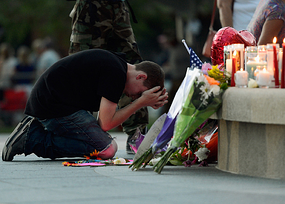 In four of the most recent high-profile mass shootings (the D.C. Sniper, Chardon High School, the Tucson shooting, and the Norway terrorist), we wrote about how the killers had damaged or nonexistent relationships with their fathers and how that factor contributed significantly to their horrific actions.

As details of the Aurora shooting emerge, it appears as though the killer had a relatively “normal” upbringing. We will continue to monitor the situation as more details emerge, as we know there is a father factor in crime. For example, children whose fathers were incarcerated are 7 times more likely to become incarcerated themselves.

However, there is another fatherhood story that has emerged from the tragic events in Aurora. In this article, Hanna Rosin writes about how, by and large, men protected women when the gunfire began, often getting shot themselves to save their girlfriends, children, and/or wives.

But one line in particular stood out: “Several women were at the midnight showing with infants and toddlers, presumably because there was no one else at home to watch them.”

I don’t know if I have much more commentary on this statement other than to say how sad it is.

Recent data published on the New York Times website shows the troubling explosion of the out-of-wedlock birthrate in our country, across all races and education levels. Note in particular how rates among white women have nearly doubled, more than doubled, or even tripled, in all categories. We know from research that these children will inevitably live in father-absent homes, because even in cases where mom and dad are living with each other at the time of the birth, 1 in 3 of those cohabiting relationships end by the time the child is only two years old. By comparison, only 1 in 17 marriages end by the time the child is 2 years old. In other words, marriage is more than 5 times more stable than cohabitation.

There is so much commentary out there about how marriage is an “obsolete” institution, and “healthy relationships” matter, not marriage. But this commentary rarely analyzes things from the perspective of what children need. And social science research isn’t sophisticated enough to measure something like, “what percentage of infants and toddlers with unmarried parents will attend midnight showings of PG-13 movies compared to their peers with married parents.” Those “intangibles” are hard to measure, but they matter greatly. And they matter to children.

I am not saying that all single parents take their children to the movie theater late at night. But I am saying that in this case, had these children had someone “else at home to watch them,” they would not have been in that theater. That’s how it works in my marriage. When I want to do something late at night, my wife stays home with our toddler. When she wants to do the same, I stay home. Very little “coordination” is needed because, a) she lives in the same house as me, and b) via our wedding vows, we have already committed to doing things like this for each other.

This is not about criticizing single parents and idolizing married parents as individuals. It is about being honest about how institutions, not individuals, affect children. The Aurora shootings have provided another example of how the institution of marriage confers benefits upon children that should never be undervalued.