Posted by Christopher A. Brown April 6, 2021
How to Help Dads with Depression
Do you work with dads who have experienced depression? If so, some exciting research has emerged on how the development... END_OF_DOCUMENT_TOKEN_TO_BE_REPLACED
Posted by Christopher A. Brown March 23, 2021
Have Dads Stepped Up During the Pandemic?
Posted by Ave Mulhern March 16, 2021
Paving the Way for Fathers to Understand Their Prerogative

My Biggest Fear As My Daughter Starts Kindergarten

I didn’t cry at school this morning. Nope, I did great. But today is still not a normal Tuesday for me. As my wife and I dropped our firstborn at her class and turned away, there were no visible tears from me. I saved my tears for the drive to my office. 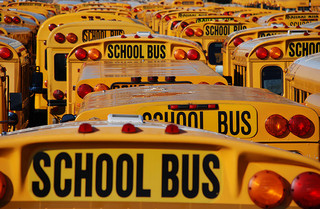 It was Darius Rucker who put me over the edge. You know, Country Darius not Hootie Darius. His song, “It Won't Be Like This For Long” made me think. It hasn't been long since we brought Bella home from the hospital. It hasn’t been long, looking back, when we were waking up at night and wishing she would sleep more than two hours at a time. It wasn’t long ago I picked her up and tossed her in the air with ease.

Time sure flies and as a dad to a daughter who started school this morning, some of my thoughts are as follows:

1) How will we deal with the increased expenses of school?
2) How will we manage busier schedules and still create time for fun and travel?
3) Will bears steal my daughter and try to raise her as one of their own because she’s so sweet and cuddly?
3a) Perhaps bears trying to raise my daughter wouldn’t be all that bad. If they are bears that love sweet and cuddly five-year-olds, perhaps they are like a group of real-life Pooh bears and we’ll love them as we do our daughter. They can live with us and we can all enjoy eating honey together….

These are some of my thoughts. I told you; it’s not my normal Tuesday.

So being stolen by a family of kind-and-gentle bears isn’t the most accurate worry as a parent. Besides, bears are probably more apt to steal children in the Shenandoah’s, not closer to metro-Washington, right?! I will Google “bear attacks in greater DC area” later. For now, know that my biggest fear as my daughter starts school is that others will influence her.

See, I have one of those good daughters. She’s sweet, really, she is. She’s kind too. She’s not like your daughter. I have been at parties and Chuck E. Cheese’s with your daughters (and sons) – they aren’t as awesome as my daughter! ; )

Aside from if she’s sleepy or hungry, she listens to her parents. She is a good big sister too. She considers her sister. Just yesterday (at Chuck E. Cheese’s, where else?) she “won” enough tickets to get two packages of Smarties. What did she do with the extra pack? Yep, she shared with her sister. I didn’t have to tell her and her sister didn’t even have to ask.

Bell had other tickets; what did she do with those? She picked an extra set of glow-in-the-dark vampire teeth. Yes, an extra set. You see, Bell has carried around glow-in-the-dark vampire teeth for some time (she may be running around the school with them right now!); but her little sister hasn’t had a set. After yesterday, all that changed. It was Bella’s idea to take the seven million tickets and pick a set of vampire teeth for her little sister. I haven’t seen a better example of sacrificial love in a long time.

I’m focusing on the wrong part of the story. My point is my firstborn is an awesome and considerate big sister and human being. Why? Because my wife and I have worked with her and molded her into this person. Over five years, we have created this machine/human being who says “thank you” and “may I” and “please.” This is no small accomplishment considering I rarely say these things.

But still, my biggest fear is other-lesser-well-meaning individuals will now influence her. Yeah, so maybe I can trust her teacher, but what about those other 20 rascals in her classroom? My wife and I are creating something here, and we don’t need others getting involved and messing it up!

Truth is, other kids will influence my daughter. She will learn to navigate her way through now unimaginable drama. One day her “best friend” will probably lie to her. One day she may be shunned by “the cool kids.” This will hurt her until one day she realizes that “being cool” only comes when you blog for a living and use social media to talk about them. I kid; but seriously, one thing is certain, while we at National Fatherhood Initiative teach about the impact of father absence, we also teach about the impact of involved fathers. We talk about how the lack of a father changes the lives of children and a society, but the truth is that active, involved and committed dads change families and societies too.

We know that children whose fathers are stable and involved are better off on almost every cognitive, social, and emotional measure researchers have developed. My biggest fear shouldn’t be the influence of fellow students and friends on my daughter. My biggest fear should be how I am influencing my daughter. There will definitely be a test. While I am nostalgic today, I know that this phase is flying by. My wife and I will keep “holding on” as the song says. We will keep hugging, kissing, loving and training our daughter. Because we know, as Country Darius sings, “it won’t be like this for long.”

What's the one thing you fear the most as a parent?