Posted by Christopher A. Brown May 4, 2021
A Must-Read Book on Fatherhood Programming
If you’ve subscribed to this blog for a while, you know that I’ve blogged often about the fantastic research sponsored... END_OF_DOCUMENT_TOKEN_TO_BE_REPLACED
Posted by Ave Mulhern April 27, 2021
Paving the Way for a Powerful Fatherhood Pledge
Posted by Erik Vecere April 20, 2021
How to Facilitate a Fatherhood Program in a Virtual World: Part 2

When Daddy Isn't in the "Family" Picture

For all the talk we hear these days about how “families can take many forms,” it seems there is one particular form that, if there was a popularity contest for family types, would be losing. It’s the one where dad is involved.

Every time I think NFI is in danger of exaggerating our claims around the prevalence of father absence and the lack of respect for the institution of fatherhood, a good reminder of our pinpoint accuracy smacks me right in the face.

The latest smack came in the form of a series of pictures in a book for toddlers. The book, First 100 Words, was sitting innocently on a shelf in my house. I mindlessly opened it and started flipping through, and came across the following picture. 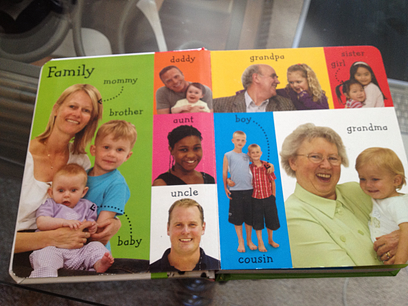 In case you can’t make out what is going on there, it shows a picture of a family that includes “mommy,” “brother,” and “baby.” Where’s “daddy”? Well, he has his own separate, much smaller picture to the right of the larger “family” picture. (it is probably also worth noting that grandma gets the second largest picture)

Talk about a stark, visual representation of our culture’s general disregard for the centrality of responsible fatherhood. It is as if the editors did not want dad interfering with the pristine image of a mom-child family.

Moreover, this is a book designed to give toddlers their first lessons about the world around them. May as well get to them early with the notion that when we talk about family, we are really talking about a mom and her kids.

One might defend the use of an image of a mother-only family with the premise that we should be cautious about offending such families, or making them feel “left out.” But why is no one ever concerned with offending two-parent families? After all, 2 in 3 children still live in mother-and-father-present homes, and reams of social science research shows it is best, on average, for kids to live in such homes. So, shouldn’t we be “protecting” this family type?

These sorts of images reinforce the false belief that fathers are not as important as mothers. For a boy in a father-absent home, it reinforces the idea that he does not have to worry about being a central part of the family he will one day have. Mom’s got it covered! This attitude “empowers” neither men nor women. 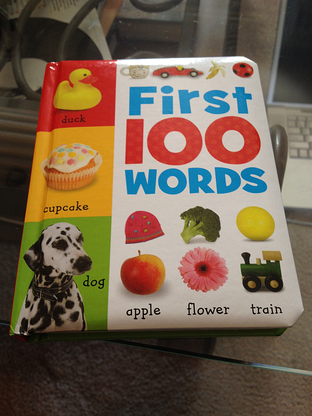 For a child growing up with a father in the home, like my son, I am sure this image will be confusing. My 2.5-year-old son is too young to express himself about something as complicated as this, but this book -- along with a lot of other messages he will get from TV commercials, etc -- shows him that fathers are on the periphery of family. When he asks the question, “How now shall I live?” the answer provided by our culture will be vague at best. If it suits you to stick around for your family, that’s fine; but if not, don’t let the door hit you in the rear on the way out.

Dads are not a feared demographic; very few people are worried about ticking us off. NFI will do its part to expose negative representations of fatherhood and award positive ones, but until market forces start to move, little will change. We saw a hint of how powerful those forces can be when Huggies made a mistake with dads.

Here’s to hoping that the mistakes are always pointed out and the offenders learn a lesson.