Posted by Christopher A. Brown June 15, 2021
How Great Dads SERVE
Father’s Day is a great time for dads to reassess their fathering. This coming Father’s Day is no exception. Three... END_OF_DOCUMENT_TOKEN_TO_BE_REPLACED
Posted by National Fatherhood Initiative June 8, 2021
Parenting In Focus: Your importance as a teacher
Posted by Christopher A. Brown June 2, 2021
Try This Creative Solution for Work with Incarcerated Dads

An Involved Father Shares What's Better Than Being Santa

This is a guest post by Scott Behson. Scott runs Fathers Work and Family. He is an Associate Professor of Management at Fairleigh Dickinson University and writes this post for NFI's "The 12 Dads of Christmas." He lives with his wife, Amy, and son, Nick, in Nyack, NY. If you are interested in writing for us, send an email. 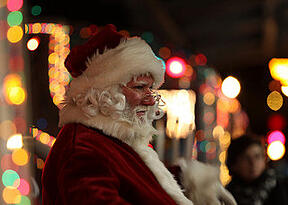 Like virtually every child, I LOVED Christmas, especially when I was young enough to believe in Santa. After growing up, Christmas is still special, but it is no longer magic. That is, until you have kids and can now pass the magic along to them- and even better YOU get to be Santa. As a dad, it is never more true than during Christmas that it is better to give than to receive.

However, my favorite Christmas fatherhood moment came not when I gave, but when it became clear to me that my son, Nick, learned the joy of giving. Two Christmases ago, when he was 5, I had taken Nick to an art center a few weeks before Christmas—you know the kind, where kids can paint ceramics or make mosaics. He chose to make a small mosaic for his mother. I helped only a little bit, and the mosaic turned out great. Both the woman at the art center and I complimented his work quite a bit. He was very proud.

As Christmas approached, Nick kept talking about what he made for mom, and became increasingly excited about giving it to her. I had to keep reminding him not to ruin the surprise. Of course, he was excited about presents, too, but he was really focused on giving the mosaic to mom.

On Christmas morning, Nick wakes up, gets us out of bed and runs downstairs to the tree. There’s a tree full of presents, including some big impressive-looking boxes and a bike with a bow. But Nick hardly even noticed. He dug through the presents to find his gift for mom, and proudly gave it to her.

For me, this was a precious fatherhood moment, and was even better than getting to be Santa. At such a young age, my son learned the true meaning of Christmas.

I hope all you fellow Santas out there have joyous holidays!

Scott is running a promotion at his Fathers, Work and Family blog. He is donating $2 to the National Fatherhood Initiative for every new person who follows his blog by the end of the year. Please click here for details.

Question: What's one thing that makes the holiday season special for you?