Posted by Christopher A. Brown October 19, 2021
Use this Exercise to Address Gendered Parenting
In your work with parents, do you address the ways in which dads and moms interact with their sons and daughters... END_OF_DOCUMENT_TOKEN_TO_BE_REPLACED
Posted by National Fatherhood Initiative October 12, 2021
My Brother’s Keeper of Greater Richmond Provides School Backpacks on Behalf of Incarcerated Dads
Posted by Christopher A. Brown October 5, 2021
This One Tactic Could Boost Retention in Your Fatherhood Program

Adapted from the original blog:
You know the guy. He’s a friend of yours. Everyone knows the guy who’d rather play video games 24/7 and live in his parents’ basement. You know, the guy who takes the storyline behind his favorite board game a wee bit too seriously. Yeah, you know the guy, as do I. I think I’ve figured out what makes this guy different from the one not living in his parents’ basement. 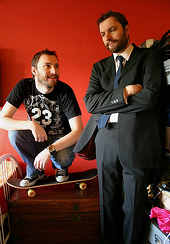 This difference is explored in Philip G. Zimbardo’s new research and book The Demise of Guys, which reveals things we’ve thought for years, but just haven’t talked about - that guys are “flaming out.”

So what’s behind this research? Zimbardo’s complaining brings great insight into the core issue. Zimbardo says media and education and society at large are the problems. Society is the “major contributor to this demise because [it is] inhibiting guys’ intellectual, creative and social abilities right from the start.” The result is young men with a lack of purpose, basic social skills, who live off of their parents.

While I think Zimbardo’s research does well to reveal the problem, the solution isn’t adapting some societal strategy to make men out of boys by retraining society to not inhibit them. Society has its issues, of course. But the problem, in my eyes, lies with the boy. There’s a difference between a boy and a man. Always has been, always will be. If you have no plan to leave your parents’ house, you’re a boy. If you don’t relate to women as equals, you’re a boy. If you aren’t emotionally able to cherish your wife, you’re a boy. If you play video games 24/7 and you’re not actually designing the games, you’re just a boy without a purpose.

Boys learn the kinds of behaviors Zimbardo talks about from their fathers. We live in an age of mass father absence. According to the U.S. Census Bureau, 24 million children in America -- one out of three -- live in biological father-absent homes. Two in three African American children live in father-absent homes. Consequently, there is a "father factor" in nearly all of the social issues facing America today. From poverty, maternal and child health, incarceration, crime, teen pregnancy, child abuse, drug and alcohol abuse, education, and childhood obesity – fatherhood changes these issues, for good or ill.

The difference, though, today is that fewer and fewer boys have the stabilizing presence of an involved, responsible, and committed father in their lives to help them navigate a world of temptations and make the transition from self-centeredness to other-centeredness – the transition from boyhood to manhood. The “demise of guys” is really, at its root, the absence of fathers.

Read the original blog post: The Difference Between a Man and a Boy