Posted by Christopher A. Brown May 4, 2021
A Must-Read Book on Fatherhood Programming
If you’ve subscribed to this blog for a while, you know that I’ve blogged often about the fantastic research sponsored... END_OF_DOCUMENT_TOKEN_TO_BE_REPLACED
Posted by Ave Mulhern April 27, 2021
Paving the Way for a Powerful Fatherhood Pledge
Posted by Erik Vecere April 20, 2021
How to Facilitate a Fatherhood Program in a Virtual World: Part 2

The Odd Life of Timothy Green: A Fatherhood “Review”

Each week, we will post a review of one of the four films National Fatherhood Initiative has nominated for the 2012 Fatherhood Movie of the Year. These will not be your typical movie reviews, but will instead focus on what in particular makes the movie a good “fatherhood movie.” Our second entry is on The Odd Life of Timothy Green. 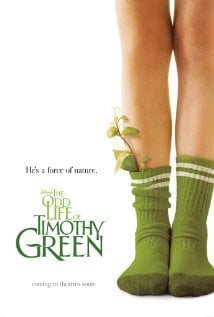 In The Odd Life of Timothy Green we see on the big screen that fathering isn’t about WHAT your child does; but more about WHO your child is.

When Odd Life opened in theaters in August, we wrote Are You Putting Your Kid in a Box? and The Odd Life of Parents. So we've talked about the child's perspective and the overall parental perspective. However, we nominated this film as a finalist for our 2012 Fatherhood Movie of the Year based on it’s real and genuine depiction of fatherhood – and the lessons we learn about fathering through Jim, Timothy’s Dad.

The Odd Life makes a dad think about which dreams matter and which dreams don't. Most times, you and I dream the wrong dreams for our kids. When we dream of "the perfect child" we are typically dreaming of WHAT our son or daughter will be instead of WHO they will be as person. These lessons come about through the daily lives of the Green family, below are two such ways us dads are taught what's most important:

1) What Versus Who: Artist or Honest?
Jim and Cindy wish that fateful night—in their wishses for the pefect child—for "Our kid to be Picasso with pencil"! Essentially, Jim and Cindy wish for an artist. They get their wish! But not as they expect. You see, the Green's also wish for their child to be, "honest to a fault". The Green's are granted that wish as well. Timothy draws a beautiful image of his mother's boss at work. But upon review, he draws his beautiful picture a little to accurate, including facial hair for the female subject! The lesson for dads? Dream and wish all you want, but be careful what you wish for—you just might get it!

2) What Versus Who: Amazing Athlete or Positive Person?
That same night of wishing for the perfect child, the Green's wish for their kid to, "score the winning goal"! Sounds simple enough, right?! Wrong! Timothy ends the big soccer game by kicking the winning goal—for the other team! Also during the game, we see another wish fulfilled in Timothy, for the Green's had also wished that night for their child to be, "the glass half-full person"! They get the positive child. Timothy is a very positive kid. So positive he sits on the bench most of the soccer game, giving his coach water at one point, totally content with not playing in the game of all games! Again, there's a lesson for dads. Dream and wish all you want, but be careful what you wish for—you just might get it!

The Odd Life serves as a great reminder of what is truly important to instill in our children – that it’s WHO they are that matters more than WHAT they do. Daily, we as dads are to cherish our children, no matter what. The dad in The Odd Life depicts a father who does exactly that.

Dads watching this movie will learn many lessons; but one of the most important lessons is this: don't put your child in a box. Don't dream up skills and things that are seen and can therefore be contained. Instead, dream and model the unseen, like character, values and respect. It's more important to be honest than to be the next Picasso. It's more important to be a positive person than to be an amazing athlete. From NFI’s perspective, this film depicts an active, involved and committed father—and we can’t ask for more than that. For this reason, we nominated it for the 2012 Fatherhood Movie of the Year.