Posted by Erik Vecere September 21, 2021
A New Sure-Fire Tool that Leads to Better Father Engagement
If you want a sure-fire way to create low and no-cost strategies to increase father involvement in your organization’s... END_OF_DOCUMENT_TOKEN_TO_BE_REPLACED
Posted by Melissa Steward September 14, 2021
[Free Webinar] Men’s Health and Fatherhood: What Do Dads Need to Know?
Posted by Christopher A. Brown September 7, 2021
More Research Shows Dads Stepping Up During the Pandemic

On Safety and Similarities with Our Kids

This is a guest post by Clay Brizendine. Clay is a CPT, a personal and corporate trainer, father of two daughters and author of the new book Shoebox Letters – Daughters to Dads. Follow Clay on the web and Twitter. Interested in guest blogging for NFI? Send us an email.

I was born in 1976, which means I had the honor of seeing Mr. Mom a number of times over the years. One of Michael Keaton’s more hilarious roles (you may disagree, but something about that movie catches my funny bone just right), the 1983 film had so many great ‘80s actors in it that it makes your head want to explode. 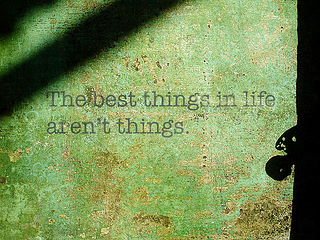 One of my favorite parts of the movie is when Michael Keaton’s character, Jack, finally gets one of his sons to give up his favorite blanket, or ‘Woobie’ as it’s referred to in the movie.  It’s a hilarious scene in which is son, Kenny, looks at Jack after he’s handed over his blanket and says, ‘Can I have a moment to myself please?’ After all, Kenny took his Woobie everywhere for years.

This scene went through my head the other day as I realized that I’m not that much unlike Kenny. Why you ask?

I have a sweatshirt that by all accounts is now 20 years old. No holes, no stains, no logos… just a plain black sweatshirt. I wear it once or twice every other week, and to this day it stands as one of my favorites.

I drove my car for 180K miles and for 11 years, and as much as I like cars, it was hard to sell it. During a particularly rough period of my life, that car was one of few constants, and the logical side of my brain had a hard time coping with the fact that I was spending more in repairs than the car was worth. I knew that meant I had to get rid of it, but it wasn’t easy.

I’m not a fan of things, to be honest. I like quality over quantity. I’d rather have 10 really nice things than 100 average things. But that doesn’t mean I don’t have my 20-year-old sweatshirt. Or that getting rid of my car wasn’t truly difficult.

We all have our Woobies. It’s just human nature. Things we gravitate to. Things we hold onto. Things that have value well beyond what someone might pay us for them.

And so do our kids.

Our kids teach us so many things. As they are constantly growing, learning, and developing, they hold onto those things that make them feel safe and that are dependable. They know that their favorite blanket, teddy bear, or pacifier is going to make things better, and they latch to those.

Are we that different as dads and adults? We’re still growing, learning, and developing. We don’t know everything. Things around us exist that we don’t have the answers to. So we look for ways, and things, to keep us safe. We have our favorite sweatshirt or car because we all need something that reminds us that things will be OK.

The next time you’re being Dad, talking with or watching or playing with your kids, and you see those elements playing out with them, think to yourself about how you can help each other be safe and comfortable. Instead of throwing out your old sweatshirt, or disposing of the Woobie too soon (we all know that eventually they might have to go), maybe revel in the similarities between you and your child.

Then throw on your favorite sweatshirt, get under their favorite Woobie, and spend some quality time getting to know each other. The safety then lies with your relationship, not the ‘things.’ And the world will be a much better place when we all feel safe with the people around us rather than the things around us.

What's something you/your spouse/kids have held on to for too long?!