Posted by Christopher A. Brown October 19, 2021
Use this Exercise to Address Gendered Parenting
In your work with parents, do you address the ways in which dads and moms interact with their sons and daughters... END_OF_DOCUMENT_TOKEN_TO_BE_REPLACED
Posted by National Fatherhood Initiative October 12, 2021
My Brother’s Keeper of Greater Richmond Provides School Backpacks on Behalf of Incarcerated Dads
Posted by Christopher A. Brown October 5, 2021
This One Tactic Could Boost Retention in Your Fatherhood Program

If you follow professional golf, you know the U.S. Open Championship is kind of a big deal. ESPN reports that Phil Mickelson skipped US Open practice to attend his daughter's eigth grade graduation. 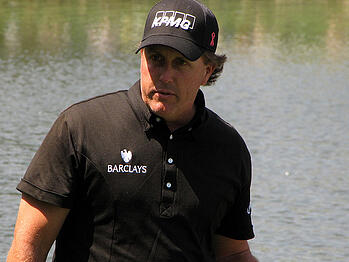 ESPN says:
Mickelson was not at Merion Golf Club on Tuesday preparing for the U.S. Open because he headed home to San Diego, where he will attend his daughter's eighth-grade graduation.

Mickelson arrived at Merion on Monday but was unable to get in much practice due to the severe weather conditions that twice caused United States Golf Association officials to close the course.

Mickelson was quoted in a statement released Tuesday he always planned to attend his daughter's graduation ceremony. But with the bad weather at Merion, he left early so he could practice at home.

Mickelson said in a statement:

The ceremony is scheduled to take place in the late afternoon Wednesday in California, and Mickelson plans to return to Merion (in Pennsylvania) sometime overnight. He has a 7:11 a.m. starting time on Thursday off the 11th tee (4:11 a.m. California time).

Even with a private jet, like I'm sure Mickelson has. He will hit the tee box like any sleepy dad would! To that we say, go Philly Mick, you're doing things #DadsWay!