Posted by Christopher A. Brown October 19, 2021
Use this Exercise to Address Gendered Parenting
In your work with parents, do you address the ways in which dads and moms interact with their sons and daughters... END_OF_DOCUMENT_TOKEN_TO_BE_REPLACED
Posted by National Fatherhood Initiative October 12, 2021
My Brother’s Keeper of Greater Richmond Provides School Backpacks on Behalf of Incarcerated Dads
Posted by Christopher A. Brown October 5, 2021
This One Tactic Could Boost Retention in Your Fatherhood Program

6 Tips and More on Talking with Your Teen about Sex

As the father of two teen girls (18 and 15), I’ve been focused on doing everything I can to ensure that they avoid sex until they’re adults and, ideally, until they’re married. My primary tactic is, quite simply, to be involved in their lives as much as possible and to love them unconditionally. 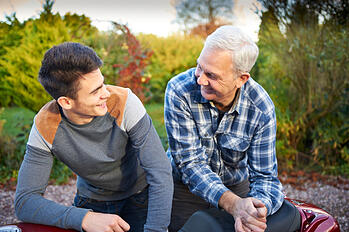 A lot of recent research has focused on teens, primarily girls, who have sex with individuals several years older because, as this research shows, children who have sex with much older partners are at increased risk for risky sexual behavior (e.g. having unprotected sex) and poorer emotional health.

A recent report by Child Trends on the latest data on sexual activity among teens confirms these facts and reveals that this is not just an issue for girls, it’s also an issue for boys.

Among young people ages 18 to 24 in 2006-10, ten percent of females and six percent of males reported that their first sexual experience occurred at age 15 or younger with an individual who was three or more years older than they were (“statutory rape”). In terms of the impact of family structure:

Whether you have a teen boy or a teen girl, it’s critical, especially if you are a single parent, to talk with your teen about avoiding sexual activity. There are too many land mines waiting for teens who have sex, especially with partners who are much older.

The good news is that parents have a lot of influence over their teens’ sexual behavior. In fact the National Campaign to Prevent Teen and Unplanned Pregnancy notes that parents are the most influential factor in teens’ decisions about sex, love, and relationships.

So don’t allow your perception that your teen doesn’t listen to sway your decision about talking with him or her about sex. Another tactic I’ve used is to send a clear message to my girls, since they were very young, that I expect them to delay sex until they’re adults and, ideally, until they’re married. They’ve actually told me they’re glad to know what I expect.

The Mayo Clinic offers these 6 tips on how to talk with your teen about sex: