Posted by National Fatherhood Initiative October 12, 2021
My Brother’s Keeper of Greater Richmond Provides School Backpacks on Behalf of Incarcerated Dads
This post is a recent press release from My Brother’s Keeper of Greater Richmond who runs NFI's InsideOut Dad® program... END_OF_DOCUMENT_TOKEN_TO_BE_REPLACED
Posted by Christopher A. Brown October 5, 2021
This One Tactic Could Boost Retention in Your Fatherhood Program
Posted by Christopher A. Brown September 28, 2021
How to Deliver a Fatherhood Program in a Housing Authority

As the former President of NFI, current President and CEO of CareNet, the nation’s largest network of pregnancy resource centers, and a father who grew up in a fatherless home, Roland Warren has a unique and personal understanding of the challenges fathers face and the common mistakes they make.

In his new book, Bad Dads of the Bible: 8 Mistakes Every Good Dad Can Avoid

, Warren shares eight stories of godly fathers making familiar yet costly mistakes and brings them into a contemporary setting so today’s dad can know how to avoid—or sometimes handle—these same mistakes. 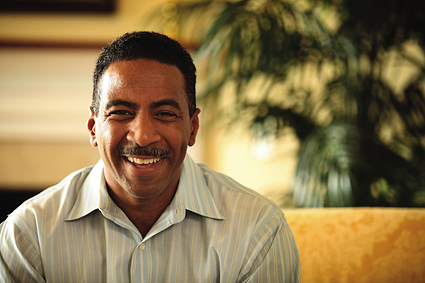 According to U.S. Census Bureau data, more than 24 million children live apart from their biological fathers. With little to no preparation, many dads are consumed by worry of failing parenthood and sadly end up quitting. Bad Dads of the Bible equips dads by learning from the mistakes of others and offering encouragement and hope. Dads will learn key ways to communicate better with their children, deal with sibling rivalry and much more so they become the best dads they can be.

About Roland
Roland C. Warren is the former President of the National Fatherhood Initiative and currently the President & CEO of CareNet, the nation’s largest network of pregnancy resource centers. He has appeared on The Oprah Winfrey Show, The Today Show, CNN, Focus on the Family, Dateline NBC, BET, Fox News Channel, Janet Parshall's America and others speaking on issues of marriage and fatherhood. His writing has also appeared in numerous publications such as The Washington Post, Christianity Today, and The Wall Street Journal. He has served on the Fatherhood Task Force of the White House Office of Faith-Based and Neighborhood Partnerships. He lives in Maryland with his wife, Yvette; together they have 2 grown sons, Jamin and Justin.

Bad Dads of the Bible Synopsis
Eight mistakes of godly men of the Bible...and how you can become the father God intended...

Some of the most noted, celebrated and godly men in the Bible made some very big mistakes when it came to raising their children. Roland Warren calls these errors “bad dad” mistakes.

Bad Dads of the Bible examines these mistakes, brings them into a contemporary setting, and gives today’s dads much-needed advice on how to avoid them. Moreover, should a dad unfortunately make some of these common mistakes, this book will give him practical advice and an easy-to-follow roadmap to help him repair his relationships with his children before it’s too late.

As dads study the examples of the fatherhood legacies of men such as Abraham, David, and Eli—men who loved God deeply—they will learn from their missteps. More importantly, this book can serve as a clarion call for men to take action now to be the fathers that God designed them to be.

Each chapter includes Reflection, Correction, and Connection sections at the end to help dads easily apply what they have read, as well as a “Good Dad Promise” to pave the way for future good parenting decisions.

This book isn't just for the Christian dad, because the fatherhood principles a dad can learn from this book are timeless.

Endorsements for Bad Dads of the Bible
“As an eyewitness to the poverty and despair of millions in America and around the world, I can say with conviction that a remarkable proportion of the world's social problems can be traced to a single cause: the dysfunction of men as fathers, husbands and leaders. Roland Warren has a big idea in this book: help men become better fathers and we can not only change our country, we can change the world.”  —Richard Stearns, President of World Vision US and author of UNFINISHED

"Bad Dads of the Bible is a fantastic book that takes a much needed look at key men in the Bible through the important lens of fatherhood. No doubt, this book will be helpful to many. Let's face it. To be a Kingdom Man, a father must avoid mistakes that can damage his children for generations. Bad Dads of the Bible is a practical guide that can help a father do just that." —Dr. Tony Evans, President, The Urban Alternative, Senior Pastor, Oak Cliff Bible Fellowship, Author-Kingdom Man: Every Man's Destiny, Every Woman's Dream

"Roland Warren has been an amazingly courageous crusader for Fatherhood in the midst of what some have called the Fatherless Generation. Now he has created a valuable resource focused on the reality of the men in scripture who were disasters when it came to being a Dad. Read this and follow his examples of bad Dads so you can become a good one.  If you know a less than wonderful father who has a difficult time seeing himself and where he could improve, this very insightful work just might do the trick." —Stephen Arterburn, Founder of New Life Ministries and Women of Faith, Best selling author of Every Man's Battle, The Seven Minute Marriage Solution and The Life Recovery Bible.

“A great read. Roland Warren has 30 years working on “Dads”. He gives great insight on life with dads and life without dads. You will love the book but be appalled by the problems without dads. Pass the book on. Each of us can be a part of the solutions. Kudos to Roland for this eye-opener.” —Red McCombs, Owner, McCombs Enterprises, Co-Founder,  Clear Channel Communications, Former Owner - San Antonio Spurs, Denver Nuggets and Minnesota Vikings

“In a society where dads are often absent either physically or emotionally, there are countless dads who want to be great fathers but just don’t know how. Roland Warren offers powerful insight to ALL fathers in his book, Bad Dads of the Bible: 8 Mistakes Every Good Dad Can Avoid, through the examples of dads in Scripture that didn’t always get it right. As dads everywhere learn about avoidable mistakes, they will celebrate having the insight they need to lead their homes as God intended.” —Alex Kendrick, writer and director

“There are few men in our nation that are more tuned in to the present demands of fatherhood. Roland serves every dad with his keen insights from Scripture on how to avoid costly mistakes and instead build a godly legacy through rich relationships with our precious children.” —Brian Doyle, President, Iron Sharpens Iron

Question: Why would you like a copy of this book?