Posted by Christopher A. Brown January 25, 2022
How to Help Dads to Help Their Kids Avoid ACEs
Have you heard the term “adverse childhood experience?” An adverse childhood experience (ACE) is an experience in... END_OF_DOCUMENT_TOKEN_TO_BE_REPLACED
Posted by Melissa Steward January 19, 2022
Give this One Thing to New Dads to Bring Them in Right from the Start
Posted by National Fatherhood Initiative January 11, 2022
How Effective Are Programs Supporting Unmarried, Nonresidential Fathers?

Many of the nation’s top sociologists and policy makers consider fatherlessness to be the most pressing issue facing American families today. Further, disadvantaged fathers in particular face numerous obstacles in raising their children, and some fail to shoulder the responsibility. Those who stay are more important than ever and must be supported.

That's why movies like "Daddy Don't Go" are so important to our culture and to the people who work tirelessly to help families and children enjoy economic and family stability.

Read on to learn more, and for details on acquiring the film at 50% off. 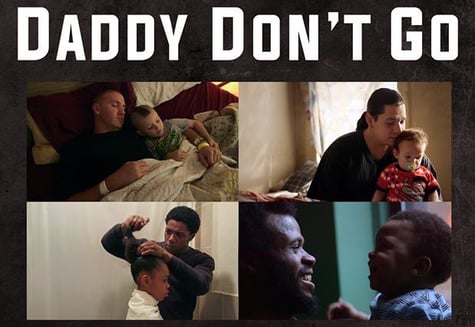 According to the U.S. Census, one in three children in America grow up without a father, placing them at a significantly higher risk to live in poverty, do poorly in school and run afoul of the criminal justice system. This is particularly true for New York City’s African-American and Latino children, of which 54% and 43% respectively grow up in fatherless households.

A 2014 study of over 40 million children and their parents by researchers at Harvard University found that family structure showed the strongest correlation with economic mobility — more so than other factors such as racial segregation, income inequality, school quality or social capital.

In fact, family structure is particularly important
for fatherless boys who are more than
twice as likely to become
absent fathers themselves.

To highlight and address these challenges, “Daddy Don’t Go” is a timely and intimate journey that serves as a clear message on the importance of fathers in the lives of our nation's children. The film follows the story of four disadvantaged fathers in NYC fighting to beat the odds and defy the deadbeat dad stereotype.

"Daddy Don't Go" was conceived
to inspire all parents—
especially those that are disadvantaged.

“Daddy Don’t Go” will resonate deeply with urban audiences eager to see a film that challenges the “deadbeat dad” stereotype with positive and compassionate images of men persevering against the odds. Through the stories of the film's subjects, “Daddy Don’t Go” raises awareness around the obstacles that disadvantaged fathers face and can be used to inspire dads in crisis, the ones that are leaving their homes in tragically high numbers.

The film also poses urgent questions that expand the ongoing national dialogue concerning fatherhood. Can a man be a good dad in spite of not being a great provider? How does being a father shift a man’s identity?

Esteemed sociologist/NYT bestselling author Kathryn Edin recently said about the film: “Every American must see this film. Why is it so heartbreakingly hard—even impossible—to be a decent dad in America if you’re poor? "Daddy Don’t Go" should sear the nation’s conscience.”

Watch the trailer here or below, and click here to learn how you can acquire the film for viewing at your organization. Enter code FIFTY%50%OFF at checkout to receive 50% off your purchase.