Posted by Erik Vecere April 13, 2021
How to Facilitate a Fatherhood Program in a Virtual World: Part 1
Who would’ve thought a pandemic would hit – so widespread – that it would change the delivery of so many fatherhood... END_OF_DOCUMENT_TOKEN_TO_BE_REPLACED
Posted by Christopher A. Brown April 6, 2021
How to Help Dads with Depression
Posted by Christopher A. Brown March 23, 2021
Have Dads Stepped Up During the Pandemic? 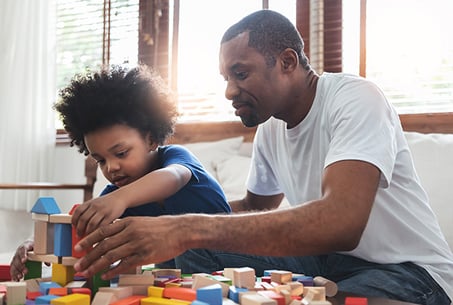 Why is it so hard to engage non-resident dads in child welfare cases? We don’t have to look far to answer that question.

Barriers to involving dads in case planning include custody issues, unemployment, child support payment and collection, domestic violence, and incarceration. Heavy caseloads also make it harder to track down a non-resident dad – it is often seen as easier to manage the ongoing interactions over the course of the case by working with just one parent, usually the mom, and the children. While it takes extra effort to involve a non-resident dad, it is usually in the child’s best interest to do so.

The National Quality Improvement Center on Non-Resident Fathers and the Child Welfare System (QIC-NRF) produced a lot of tools that can equip you to more effectively work with non-resident dads in the child welfare system. The QIC-NRF was a collaborative effort among the American Humane Association (AHA), the American Bar Association (ABA) Center on Children and the Law, and National Fatherhood Initiative® (NFI).

One tool the QIC-NRF produced is the one-day Social Worker Training Curriculum: Engaging the Non-Resident Father. It provides knowledge to support a practice shift toward engaging non-resident dads in child welfare cases. This curriculum includes the following engagement strategies that can help you in your work:

The more you learn about the dads you serve, the better equipped you will be to identify which of these strategies will work best in pulling the dads out of the shadows and into closer relationships with their children.

How difficult is it for you to engage non-resident dads in the child welfare system?

Have you encountered any situations where these strategies would have been helpful?