Posted by Christopher A. Brown February 9, 2021
What 713 Dads Say About InsideOut Dad® Provides Further Evidence for Its Effectiveness
A study of 713 incarcerated dads by researchers at Utah State University says a lot about the effectiveness of National... END_OF_DOCUMENT_TOKEN_TO_BE_REPLACED
Posted by Ave Mulhern February 2, 2021
Paving the Way for Fathers to Find Their Purpose
Posted by Christopher A. Brown January 26, 2021
Why You Should Use Understanding Dad™ to Improve Coparenting

Let Your Teen Girl Do This, She’ll Be Glad You Did

The best thing you can do for your teen girl is to let her figure out life on her own.

Do you find that advice hard to swallow? If you do, you’re not alone. It’s difficult for many parents to allow their teen daughters the freedom they need to develop into healthy adults who rely on their parents for very little. 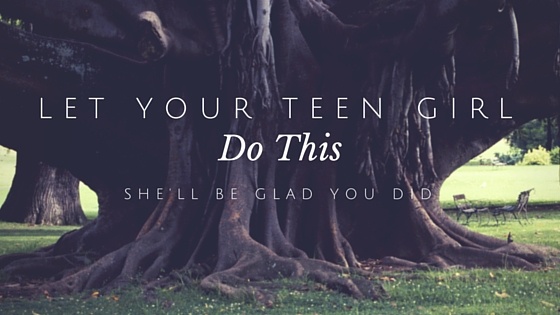 Earlier this month, my daughter’s high school soccer team held their annual banquet. My daughter is a senior. It’s tradition for each senior to deliver a speech toward the end of the banquet in which she gives thanks to her coach, teammates, and parents for helping her during her soccer career.

As most girls do, my daughter saved thanking her mother and father for last. When she thanked me, she said, “Daddy. Thank you for letting me figure out life on my own.” First of all, I love that she still calls me “Daddy.” But she couldn’t have paid me a higher compliment than to acknowledge that I have helped her (largely) only when she’s asked for my help. And even then, I’ve usually asked her questions, helped her consider alternatives rather than telling her what to do, and reminded her that most situations are not black and white but shades of grey.

The reason so many parents of teen girls over protect them—even parents with the best intentions and love for their daughters—is the endemic belief in our country that danger lurks around every corner, despite evidence to the contrary. While parents of teen boys can certainly over protect them, they are more likely to watch their sons from a distance as they let them take risks and make mistakes. (Truth be told, some of those parents don’t provide enough guidance to their sons, but that’s a subject for another post.)

The need to allow teen girls to figure out life on their own is underscored by psychologist Lisa Damour in her new book Untangled: Guiding Teenage Girls through the Seven Transitions into Adulthood. In this interview, she points out that too many parents overreact to the challenges most teen girls face, such as issues around popularity. Let’s say your teen daughter has a friend who suddenly becomes popular and doesn’t want to hang out with your daughter any longer. Many parents minimize or try to solve this problem rather than simply offering a compassionate ear.

Damour’s advice? Be their dumping ground. Realize that most teen girls’ problems last 24 hours or less. Even those problems that seem from the perspective of your teen to be life altering when they first occur magically disappear. Poof. Gone. As if they never happened.

What if the problem doesn’t go away so quickly? Damour encourages parents to let their daughter experience her feelings, figure it out, and even suffer the consequences, especially if she doesn’t take action on her own to solve it. And therein lies another reason so many parents struggle to let their teen girls figure out life on their own—the pain they feel watching their daughters’ pain as their daughters navigate their own lives and make mistakes along the way.

The bottom line is that by letting your teen daughter figure out life on her own, you will give her a piece of the puzzle to the greatest gift any parent can give their child: an environment in which to develop self-awareness. A healthy adult is a self-aware one. Keep that end game in mind whenever you struggle to implement this advice.