The Secret Sauce for Dads to Take Paternity Leave

In a previous post in this blog, I wrote about Netflix's new parental leave policy that gives new parents up to one year of paid leave upon the birth or adoption of a child. While we should applaud Netflix for that policy, I noted that it lacks the teeth necessary to encourage dads to take advantage of it. 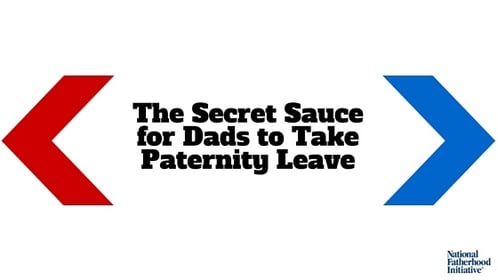 The reason it lacks teeth is that dads require efforts that speak specifically to them --that meet their needs and wants as dads broadly and within the context of work-family balance. Dads are much less likely than moms to take parental leave. While 90 percent of dads in the U.S. take some time off from work upon the birth or adoption of a child, most of them take a week or less off.

To speak directly to dads, I encouraged Netflix to create a campaign -- an internal marketing campaign -- that encourages dads to take advantage of this policy. Furthermore, I provided some specific suggestions for elements of the campaign. One of those elements is to use dads as spokespersons to deliver the value proposition for taking leave that will resonate with dads.

But how and when will we reach the tipping point for this transformation? That's a good question for which I don't have an answer. But it will certainly require at least the following elements:

I'm optimistic we can reach a tipping point. When Norway extended their parental leave policy a little more than two decades ago to include four additional weeks of leave specifically for dads, the rate of dads who took leave skyrocketed from a mere 3% to 35%, especially in blue-collar industries. Since then, the rate has continued to build to 70%. In California, five years after the state instituted a paid parental leave program in 2004, 25% of California dads took advantage of it, an increase of nearly 50% during that time.

The bottom line is this: dads are only human. They need the social proof that can come only from an environment that supports the most vital role they will ever play, that of raising the next generation of Americans and for whom taking paternity and maternity leave will never be in question.