Posted by National Fatherhood Initiative June 8, 2021
Parenting In Focus: Your importance as a teacher
This article is written by Cynthia Martin and originally appeared in the Sequim Gazette. The article is republished... END_OF_DOCUMENT_TOKEN_TO_BE_REPLACED
Posted by Christopher A. Brown June 2, 2021
Try This Creative Solution for Work with Incarcerated Dads
Posted by Christopher A. Brown May 18, 2021
The 7 Things to Teach Dads about Civility

When Dad's in Jail—He's Still Dad

At NFI, we implement two main strategies for engaging society about fatherhood.

1) Top-down: through communications campaigns and social media and 2) Bottom-up: our "boots on the ground" -- our work with community-based organizations and other civic partners to train and equip leaders to better serve the fathers in their communities.

One such example is our work in jails and prisons. The Richmond Times-Dispatch recently featured a program that's impacting the capital city of Virginia. The city jail uses our InsideOut Dad® program that helps prisoners to be better dads.

“I never had my dad or nobody tell me they were proud of me until this program..." —William Jones, recent graduate of NFI's InsideOut Dad® skill-building program for incarcerated fathers. 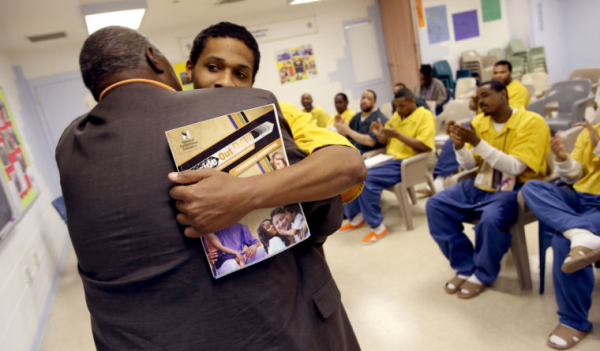 “The goal is to get everybody to communicate with their kids, to relearn some parenting skills you never knew you had,” Fries continued. At the completion ceremony, the men shared how the program affected them. Below are excerpts from the news article:

The InsideOut Dad® group-based program can be easily shortened for use in jails and other short term stay facilities. Download our new FREE InsideOut Dad Guide for Jails which provides a road map for modifying the program to either 12 or 8 hours.

Image: [Daniel Sangjib Min/TIMES-DISPATCH] Dennis Fries (left) an instructor for the InsideOut Dad® program, gets a hug from William Jones, a participant in the class who wants better relationships with his four children.