Posted by Christopher A. Brown October 19, 2021
Use this Exercise to Address Gendered Parenting
In your work with parents, do you address the ways in which dads and moms interact with their sons and daughters... END_OF_DOCUMENT_TOKEN_TO_BE_REPLACED
Posted by National Fatherhood Initiative October 12, 2021
My Brother’s Keeper of Greater Richmond Provides School Backpacks on Behalf of Incarcerated Dads
Posted by Christopher A. Brown October 5, 2021
This One Tactic Could Boost Retention in Your Fatherhood Program

Sep 30, 2013
Share
This is the fifth video in the series featuring dads getting help from the 2014 Honda Odyssey as they "do good" around their communities. We call it #DadsDoingGood. 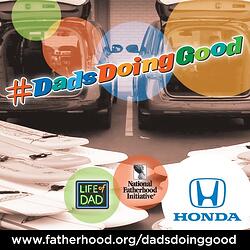 Here's a recap of each video by week:

Week 1 > Mobile Library > Watch as the dads load up the Odyssey with books and surprise preschool children.

Week 2 > Lemonade for Charity > A great example of how you, dad, can help educate and serve a much-needed cause in your community. The proceeds from the lemonade stand raised awareness for congenital heart defects.

Week 3 > Little League Surprise > Dads use the 2014 Honda Odyssey to remake a little league field by replacing the pitcher's mound, backstop, & batter's box with help from a contractor, coaches, & players.

Week 4 > Surfing Sensation > Dads bring the Odyssey to the beach, where they help a volunteer group teach kids with cystic fibrosis how to surf. Watch as one child takes her first wave EVER!

Week 5 > The New Drive-In Theater > Dads arrive at a film school and with help from two Odysseys, host an extraordinary movie screening to unveil the student films with popcorn, soda and the red-carpet treatment.