According to the U.S. Census Bureau, 18.4 million children, 1 in 4,
live without a biological, step, or adoptive father in the home.*

Research shows that a father's absence affects children in numerous unfortunate ways,
while a father's presence makes a positive difference in the lives of both children and mothers.
*U.S. Census Bureau. (2022). Living arrangements of children under 18 years old: 1960 to present. Washington, D.C.: U.S. Census Bureau.

The Father Absence Crisis
in America 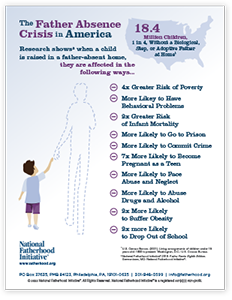 The Strengths of Father Presence 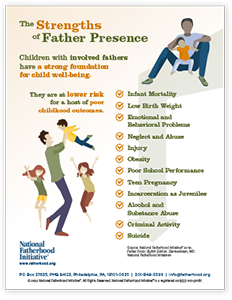 Why Involved Dads
are Good for Moms 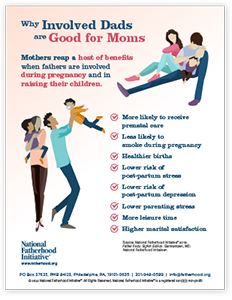 The Father Factor in Child Emotional and Social Well-being

Positive forms of father involvement (involvement in child-related activities, engagement in multiple forms of involvement and developing a positive father-child relationship) were associated with children’s social and emotional well-being as well as behavioral adjustment and academic achievement.

The absence of a biological father contributed to increased risk of child maltreatment.

The Father Factor and Education

The lowest achievement and the highest risk of school failure and course failure were experienced by adolescents who did not have a resident father figure and didn’t know the identity of their fathers.

Researchers used secondary data in a sample of 835 juvenile male inmates from the Interuniversity Consortium for Political and Social Research to examine gun carrying and drug trafficking in young men, linking father absence to the likelihood of engaging in these behaviors. They found that father absence was the only disadvantage on the individual level with significant effects on gun carrying, drug trafficking, and co-occurring behavior. They found that individuals from father absent homes were 279% more likely to carry guns and deal drugs than peers who lived with their fathers.

According to the U.S. Census Bureau, 19.5 million children, more than 1 in 4, live without a father in the home.

Depression and delinquency scores were much higher among the portion of adolescent respondents who reported having a father that had, at some point, been incarcerated.

The Father Factor and Childhood Poverty

Father involvement seems to reduce the occurrence of behavioral problems in boys and psychological problems in young women, as well as enhancing cognitive development, while decreasing delinquency and economic disadvantage in low-income families.

Father absence increased the risk of infant mortality, and that the mortality rate for infants within the first 28 days of life is four times higher for those with absent fathers than those with involved fathers.

The Positive Impact of Father Involvement

Many people believe that family structure doesn’t really matter, as long as children are cared for and loved by someone, anyone. However, new research on father absence shows that old adage, “correlation does not imply causation,” does not apply to the effects of father absence on children. In other words, according to absent father statistics, for many of our most intractable social ills affecting children, father absence is to blame.

The Father Factor in Child Development

The Father Factor in Poverty

The Father Factor in Child Abuse

A study using data from the Fragile Families and Child Wellbeing Study revealed that in many cases the absence of a biological father contributes to increased risk of child maltreatment. The results suggest that Child Protective Services (CPS) agencies have some justification in viewing the presence of a social father as increasing children’s risk of abuse and neglect. It is believed that in families with a non-biological (social) father figure, there is a higher risk of abuse and neglect to children, despite the social father living in the household or only dating the mother.

The Father Factor in Drug and Alcohol Abuse

Even after controlling for community context, there is significantly more drug use among children who do not live with their mother and father. Additionally, individuals from father-absent homes are 279% more likely to carry guns and deal drugs than peers living with their fathers.

The Father Factor in Education

Father involvement in schools is associated with the higher likelihood of a student getting mostly A's. This was true for fathers in biological parent families, for stepfathers, and for fathers heading single-parent families. Additionally, students living in father-absent homes are twice as likely to repeat a grade in school.

The Father Factor in Emotional and Behavioral Problems

Data from three waves of the Fragile Families Study (N= 2,111) was used to examine the prevalence and effects of mothers’ relationship changes between birth and age 3 on their children’s well-being. Additionally, children born to single mothers show higher levels of aggressive behavior than children born to married mothers. Living in a single-mother household is equivalent to experiencing 5.25 partnership transitions.

The Father Factor in Crime

A study of 109 juvenile offenders indicated that family structure significantly predicts delinquency. Additionally, adolescent boys with absent fathers are more likely to engage in delinquency than those who are present.

Get More Research on Father Absence + Crime in Father Facts 8 >

The Father Factor in Incarceration

92% of parents in prison are fathers, and between 1991 and 2007 the number of children with an incarcerated father grew 79%. Even after controlling for income, youths in father-absent households still had significantly higher odds of incarceration than those in mother-father families. Youths who never had a father in the household experienced the highest odds.

Get More Research on Father Absence + Incarceration in Father Facts 8 >

Infant mortality rates are 1.8 times higher for infants of unmarried mothers than for married mothers. Compared to pregnant women without father support, pregnant women with father support experience a lower prevalence of pregnancy loss 22.2% compared to 48.1%. Allowing new fathers to be involved in caring for their child in the first days of a child's life can have positive long-term benefits.

The Father Factor in Childhood Obesity

The National Longitudinal Survey of Youth found that obese children are more likely to live in father-absent homes than are non-obese children.

Additionally, adolescents in single-mother and single-father families are at higher risk of risky behaviors, victimization, and mental distress compared to those in two-parent families. Being raised by a single mother raises the risk of teen pregnancy, marrying with less than a high school degree, and forming a marriage where both partners have less than a high school degree. However, higher quality father-daughter relationships are a protective factor against engagement in risky sexual behaviors.

Source: Teachman, Jay D. “The Childhood Living Arrangements of Children and the Characteristics of Their Marriages.” Journal of Family Issues 25 (January 2004): 86-111.

The Father Factor in Pregnancy

The Father Factor in Risky Behavior

The Father Factor in Toddler Happiness

Learn more about the effects of father absence and fatherless homes, and how get involved by visiting the following resources: