Posted by National Fatherhood Initiative May 24, 2022
The State of Moms and Dads in America (2022)
This article is written by Mike P. Taylor and was originally published at the Dad Well Done. It is republished here... END_OF_DOCUMENT_TOKEN_TO_BE_REPLACED
Posted by Christopher A. Brown May 17, 2022
Here’s What We Know About the Work of Federal Fatherhood Grantees
Posted by Ave Mulhern May 10, 2022
3 Ways to Keep Fatherhood Program Group Sessions Focused and on Track 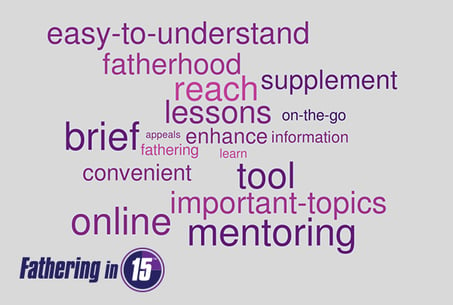 That’s right! All of the text, videos, and printable handouts have been translated into Spanish and are available via a separate subscription to the Spanish Translation of Fathering in 15™.

Of course, a few other reasons we keep talking about Fathering in 15™ are because it’s flexible, accessible, and easy to use by a multitude of organizations. It also resonates with all types of dads. (If you’re still not sure, refer to the awesome word map I created for this blog post to see more words that practitioners use to describe it!)

So, in an effort to help more fatherhood practitioners understand why Fathering in 15™ helps so many organizations work with dads, I asked our more than 100 subscribers this simple question:

Why do you/your organization like using Fathering in 15™ – and tell me in 15 words or less.

Here are 15 of the responses I received!

To learn more about Fathering in 15™, view our demo video and our pre-recorded webinar.