Posted by Christopher A. Brown January 31, 2023
The Value in Customizing a Fatherhood Program
There’s a lot of emphasis these days on implementing fatherhood programs with fidelity. Indeed, many funders of... END_OF_DOCUMENT_TOKEN_TO_BE_REPLACED
Posted by Ave Mulhern January 24, 2023
A Few of My Favorite Things… and they are FREE!
Posted by Christopher A. Brown January 17, 2023
How Father Involvement and Bi-Strategic Parenting Positively Affect Children’s Brain Development

Champion of Change And a Whole Lot More 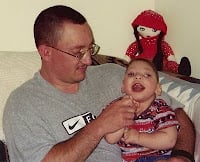 Yesterday, I had the pleasure of accompanying LS1 Christopher Cady, US Navy, to a special ceremony at the White House honoring great dads. Cady is, of course, National Fatherhood Initiative’s 2011 Military Fatherhood Award winner, and, as part of its Champions of Change initiative, the White House wanted to further honor him during its week of activities leading up to Father’s Day this Sunday.

It was quite an event. What struck me the most was the incredible stories that dads told of overcoming enormous obstacles to not only be involved in their own children’s lives, but to be “double duty dads” to other children in their communities. One father was a gang leader who was incarcerated; another witnessed horrible violence in his home growing up; another was abandoned by both of his parents… the list goes on. Yet, in the face of these huge obstacles, from which many people would have turned and run, they hung in there for the simplest, yet most important reason in the world… their kids.

Of course, there is our very own Christopher Cady. As you may know from his nomination video, Chris is the primary caretaker for his severely disabled son, Joshua. Chris is Joshua’s eyes, ears, arms and legs. He is everything to his son.

Having met Chris in person for the first time yesterday, I couldn’t help but notice how calm of a guy he is. He takes everything in stride. He is always pleasant. In other words, he has exactly the kind of patient attitude he needs in order to be the kind of dad his son needs.

And not only that, he is working hard to make life better for all military dads, especially ones with special needs children. He is a Command Exceptional Family Member Coordinator and helps service members seek out information and resources for their children. On a local community level, he is a mentor for the Military Special Needs Group, the Special Education Advisory Committee, and the Kitsap Fathers Network. And more…

Chris didn’t just stop with his own son – he realized that to move from “good to great” he would have to help all of the other sons and daughters out there who deserve good dads.

In other words, he is a Champion of Change.

A video of Chris’ day at the Champions for Change event will be available at WhiteHouse.gov next week. Chris will be presented with his 2011 Military Fatherhood Award tomorrow near his base in Bremerton, WA.