Posted by Christopher A. Brown January 31, 2023
The Value in Customizing a Fatherhood Program
There’s a lot of emphasis these days on implementing fatherhood programs with fidelity. Indeed, many funders of... END_OF_DOCUMENT_TOKEN_TO_BE_REPLACED
Posted by Ave Mulhern January 24, 2023
A Few of My Favorite Things… and they are FREE!
Posted by Christopher A. Brown January 17, 2023
How Father Involvement and Bi-Strategic Parenting Positively Affect Children’s Brain Development

May 12, 2010
Share
There was a lot of pressure on Vinny and I to make mommy's first Mother's Day memorable. I knew that getting a Hallmark card and some flowers would not be enough. The "thought" only counts for so much...

So, we (notice how I am attributing rational thought to a 4-month-old) decided to make mom a homemade card and other hand-crafted items instead.

The next step, of course, was to go retrieve Vinny at day care so we could make the gift together in the one place where mom would not be around - my office.

When we got to my office, I was ready to create. Vinny was asleep. Had I fully read the instructions on the footprint-making kit, I would have known that it was best to leave the child asleep while making his footprint. Instead I woke him up, and upon inserting his foot into the plaster gel, he began kicking, squirming, and crying. I tried to do the same with his hand. In seconds, he had space-age gel between all of his fingers.

I knew I had to act fast. The gel was hardening. My co-workers (Renae, Jason, Mike, Amy, and Natalie) were doing their best to help, but it was too late. The gel hardened and the project was lost.

Good thing I had a Plan B. The finger paints. I decided to use red, because it stands out on light-colored construction paper. It also stands out on clothing. Mine and the baby's. All of my co-workers had deserted me at this point, except Renae, who must like crying babies trying to make handmade Mother's Day gifts.

Nevertheless, after much more kicking, squirming, and crying (mine and the baby's), we were able to get two decent footprints and two decent hand prints onto the paper.

I was sweating by the time it was over. After many paper towels, we were able to get all of the paint and gel off Vinny's hands and feet. There would be no trace elements left for mom to ask about when we got home -- "Why does the baby have red paint on his feet? And why are your pants covered in that same red paint?"

Alas, mom did not suspect a thing. Baby was clean, and I had changed my clothes by the time she got home. Whew... 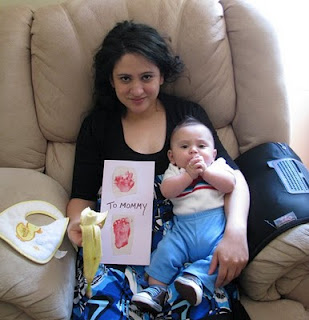