Posted by Christopher A. Brown January 31, 2023
The Value in Customizing a Fatherhood Program
There’s a lot of emphasis these days on implementing fatherhood programs with fidelity. Indeed, many funders of... END_OF_DOCUMENT_TOKEN_TO_BE_REPLACED
Posted by Ave Mulhern January 24, 2023
A Few of My Favorite Things… and they are FREE!
Posted by Christopher A. Brown January 17, 2023
How Father Involvement and Bi-Strategic Parenting Positively Affect Children’s Brain Development

Today, NFIs Vice President of Public Relations, Vince DiCaro is in Bremerton Washington, awarding our 2011 Military Fatherhood Award winner, Chris Cady. As we have said, Chris embodies a wonderful example of a military dad who displays an ongoing commitment and dedication to his son while balancing military life and mentoring other military fathers/children, specifically those with special needs. Vince will present the award to Chris in front of his Commanding Officer, family and peers, with Press at the ready. A truly special occasion.

But honestly, whats so special about this award presentation?

While at first glance there doesnt seem to be anything entirely special about an award presentation on our winners military base, it truly symbolizes so much more. Every day, many of Americas 1.8 million military children struggle with difficult situations and emotions that are foreign to non-military children. They watch their dads plane take off to a distant land and agonize that they may never return.

Have you ever considered that data on military children shows that they experience many of the same outcomes as children who live in father absent homes? When you really think about it, it makes sense. Military children experience increased depression, heightened behavior problems, lower academic achievement, etc.

Its for this reason, that NFI is sure to honor military dads - in front of their peers  to encourage all military dads to go the extra mile and be a dad to their kids, and even to other children, in their area of influence. 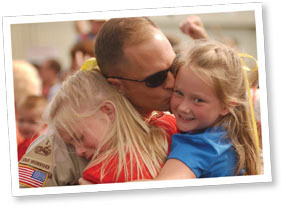 Going beyond the award...

In fact, NFI goes beyond just giving one special military dad an award each year. Were committed to working with the military to increase the number of installations who offer fatherhood programs to educate military dads and provide them with the skill-building resources they need to be involved, responsible, and committed dads, before, during, and after deployment.

We can all agree that our military servicepersons deserve our utmost support, and its our honor, with the help of donors and supporters, that we build up NFIs Strong Fathers, Strong Families Fund to provide valuable fatherhood programming to military installations, which in turn provides innovative ways for military children to stay connected to dad while hes deployed. Consider supporting this worthy cause.

Military children are the true award winners when military dads are equipped to be the best dads they can be.