Posted by Christopher A. Brown January 31, 2023
The Value in Customizing a Fatherhood Program
There’s a lot of emphasis these days on implementing fatherhood programs with fidelity. Indeed, many funders of... END_OF_DOCUMENT_TOKEN_TO_BE_REPLACED
Posted by Ave Mulhern January 24, 2023
A Few of My Favorite Things… and they are FREE!
Posted by Christopher A. Brown January 17, 2023
How Father Involvement and Bi-Strategic Parenting Positively Affect Children’s Brain Development

The Masters, Tiger Woods and Fatherhood 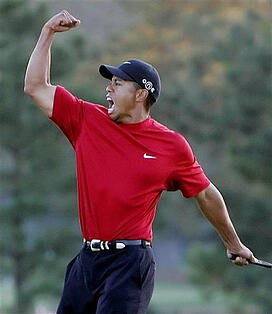 It doesn't get much better than this; The Masters Tournament starts today and it's Throwback Thursday! Can you believe it?! Today we go back to 1997. It was Tiger Wood's first major tournament. Tiger had won three consecutive U.S. Amateur titles and a NIKE endorsement. But winning The Masters was his stamp on a new generation of golfer.

If you recall, Tiger not only won The Masters, he dominated it. He set several tournament records including the scoring record for shooting an 18-under-par 270. In case you weren't counting, that was 12 shots lower than second place finisher.

In the embedded video, you hear the great CBS announcer Jim Nantz say as Tiger's putt lands in the cup, "There it is...a win for the ages!" Tiger didn't misstep—he walked directly to his father.

Tiger would say later in an interview that they didn't think his dad would attend the tournament due to health issues. What a great moment in sports history! Our video ends by saying, "A father can change the world. One child at a time."

Remember dads, as our video says, "It takes a man to be a dad." As you watch The Masters Tournament today and through this weekend, know that you can change the world by being an involved father.