Posted by Christopher A. Brown January 31, 2023
The Value in Customizing a Fatherhood Program
There’s a lot of emphasis these days on implementing fatherhood programs with fidelity. Indeed, many funders of... END_OF_DOCUMENT_TOKEN_TO_BE_REPLACED
Posted by Ave Mulhern January 24, 2023
A Few of My Favorite Things… and they are FREE!
Posted by Christopher A. Brown January 17, 2023
How Father Involvement and Bi-Strategic Parenting Positively Affect Children’s Brain Development

When Universal contacted me about flying my daughter and I to Florida, it took me seconds to respond in the affirmative. Once all was squared away and I knew we were flying to Florida, I had to tell my six-year-old daughter. But how much should I tell her? 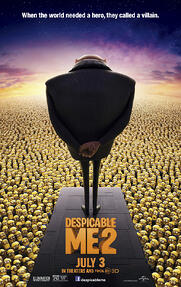 After announcing plans for our Despicable Me 2 weekend at a hotel—I realized I needed to be careful so as not to give too many details. To keep the surprises, I decided to give Bella one clue per day leading up to our big weekend. Her questions clearly reveal what was on her six-year-old mind that particular day. My answers are in parenthesis:

As you can see, this "26 Questions" game was the perfect plan! I was able to give her some information, but the entire weekend was still a surprise to Bella. She simply knew we were flying in a plane to Florida, watching Despicable Me 2 and staying in a hotel. That's pretty much it. Everything that follows was a surprise! Yay for parenting secrets!


We first found Florida on our map, Orlando to be exact: 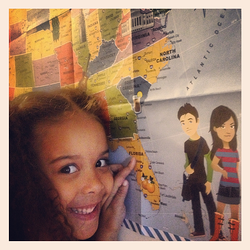 Then, we packed. Ever packed with a six-year-old? Yeah, it's fun. Bell packed as if she wanted daddy to get frisked. She wanted to take her collection of 50 state quarters and upward of 15 fluffy bears. I managed to get the fluffy bear count to three. : 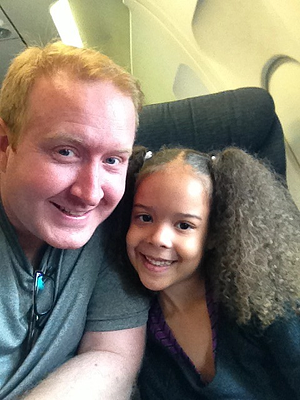 We arrived in Florida at the Loews Portofino Bay Hotel (only the best for us!). This "Minion Basket" greeted us in our room and we were handed these (VIP badges):

Then, we were whisked away to the Despicable Me 2 premiere at Universal Studios where very large popcorns and sodas awaited. We enjoyed the film. I've never seen a human consume so much popcorn and drink without using the restroom... Bell had lots of soda too!
After the show, it was the after party. The Minion Party:

We partied with characters from the film: 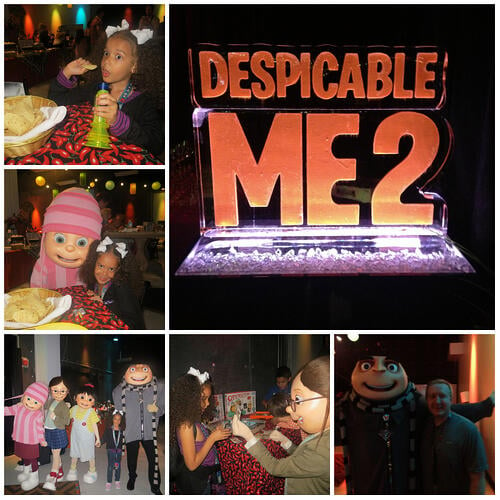 The next morning, we had a sensible, Despicable Breakfast: 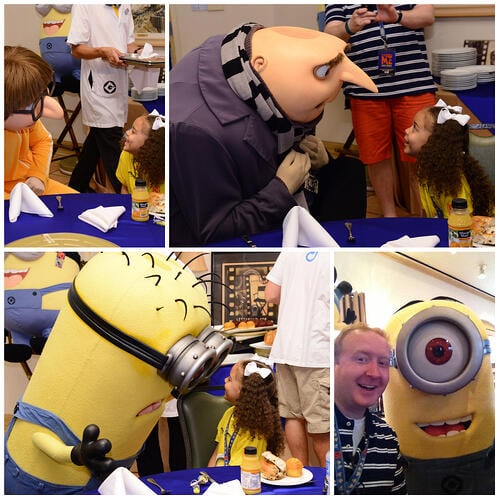 We enjoyed a full day at Universal Studios, including a scavenger hunt and VIP Tour on Saturday (stay tuned for blog post 2!). Then, we attended a special reception...Despicable Dessert:

Our daddy-daughter weekend was an absolute blast. The opportunity to hop on a plane and fly to Florida with Bella (not her first flight—but her first time traveling to Florida!) and spend quality time creating memories, just us two, was an experience Bella may never forget—I know I won't. Every time we see the "Universal" branding at the start of a film or advertisement; we will both be reminded of our 'despicable' trip. Thank you, Universal, for making me look like the best dad ever to my Bella.

Check out trailers of the upcoming Despicable Me 2 in theaters July 3 and be sure to follow all the "despicable" social online.

Despicable Me 2 Clip: Never Get Older