Posted by Christopher A. Brown January 31, 2023
The Value in Customizing a Fatherhood Program
There’s a lot of emphasis these days on implementing fatherhood programs with fidelity. Indeed, many funders of... END_OF_DOCUMENT_TOKEN_TO_BE_REPLACED
Posted by Ave Mulhern January 24, 2023
A Few of My Favorite Things… and they are FREE!
Posted by Christopher A. Brown January 17, 2023
How Father Involvement and Bi-Strategic Parenting Positively Affect Children’s Brain Development

David Kibler is senior pastor at Catalyst Christian Church. He has found a way to combine two of his passions—parenting and ministry. He created fatherhood classes at the Jessamine County Detention Center and is helping connect fathers to families—even when the fathers are behind bars. 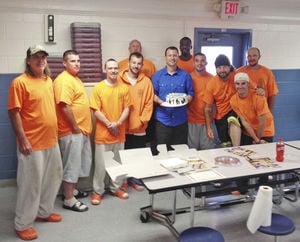 Writing for The Jessamine Journal, Amelia Orwick brought Pastor Kibler's great work to our attention. In her column, she discusses how InsideOut Dad®, our curriculum that works to bridge the gap between incarcerated fathers and their children, is helping connect incarcerated fathers to their families. The following post comes mostly from Amelia's article. We recommend you read her full article here.

“If we’re not going to carry the gospel to dark places then what are we doing?” Kibler asked. “One of the darkest places in Jessamine County is the jail.”

In June, Kibler and his own father wrapped up their first session in Jessamine County, after getting their start at the Fayette County Detention Center through the Lexington Leadership Foundation in 2013. They are the first father-son teaching duo in the area, Kibler said.

What's a typical class look like? 10 inmates usually attend one class per week for a 12-week period. In Jessamine County, however, inmates attended two classes per week for six weeks.

“They all love their kids,” Kibler said. “They just don’t know how to be dads.”

A father of four, Kibler has no problem teaching the men about character building, discipline, co-parenting and childhood development.

“Most of these guys don’t have dads,” Kibler said. “To see a grown man and his grown father working together, it’s been a really neat example for them.”

“Most of these guys don’t have dads." —Pastor Kibler

Kibler, who has taught almost 10 sessions alongside his father, also enjoys the familial experience, he said.

“It’s really cool when your dad jumps in on something you’re passionate about,” Kibler said. “ ... We just have a great time.”

By improving relationships, InsideOut Dad® lowers recidivism rates at the detention centers where it is in place. On average, about 70 percent of addicts return to jail. But for men who have completed the program, that number is only 35 percent, Kibler said.

Implementing the program was the beginning of a push for more rehabilitative programs at the detention center, said Jon Sallee, Jessamine County jailer.

“I hope this is just the tip of the iceberg of what we’re going to be able to do at the jail,” Sallee said.

The feedback from inmates who participated in the first session was overwhelmingly positive, he added.

“They all really enjoyed the program and learned a lot. Hopefully they’ll use those tools when they get out,” Sallee said. “ ... They can come out and be with their families, be more productive, be more understanding.”

Kibler remains in touch with many who have completed the program via Facebook, he said. Others have joined Catalyst Christian Church and given their testimony.

“(Catalyst) celebrates the prison mission,” Kibler said. “ ... The support I get from my church is amazing.”

Kibler said he also makes himself an “ongoing resource” by offering free marriage counseling and wedding services to the men who go on to marry the mothers of their children.

“I really like these guys. They’re my friends,” Kibler said. “We spend a lot of time together.”

The program is offered to inmates on a first-come, first-serve basis. Kibler has grown as a minister and a father since becoming involved with InsideOut Dad, he said.

“My favorite time of the week is 10:30 on Sunday morning at Catalyst,” Kibler said. “My second favorite time is 9 o’clock on Tuesday mornings at the (detention center).”

Nice work Pastor Kibler, Catalyst Church, and the jail in Kentucky! Keep up the great work of serving fathers and families in your community! 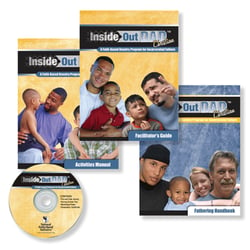 This post spotlights our InsideOut Dad Christian™ resource. Whether you work in corrections, are faith-based, or simply want to volunteer leading dads in your community, learn more and download free samples of our popular InsideOut Dad® Programs here.