Posted by Ave Mulhern January 24, 2023
A Few of My Favorite Things… and they are FREE!
You may know that National Fatherhood Initiative® (NFI) is the nation's leading provider of fatherhood research,... END_OF_DOCUMENT_TOKEN_TO_BE_REPLACED
Posted by Christopher A. Brown January 17, 2023
How Father Involvement and Bi-Strategic Parenting Positively Affect Children’s Brain Development
Posted by Erik Vecere January 10, 2023
One-On-One Delivery of NFI Programs – So Simple, So Effective!

How One Hour Changed My Image of Jerry Jones

Dallas Cowboys owner Jerry Jones is undeniably one of the most polarizing figures in pro sports. Ever since he booted the legendary Tom Landry from his perch atop America's Team, Jones has assumed the mantle of maverick owner controlling every aspect of the team's operations as president and general manager. 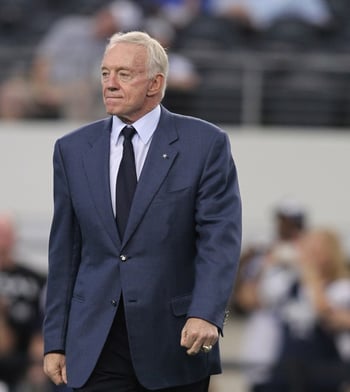 What's also undeniable is his business acumen. Setting aside the first five years of his reign in which the Cowboys went from NFL doormat to dynasty, he's put a mediocre product on the field. Indeed, since their last Super Bowl triumph in 1995, the Pokes are a measly 162-158 with only three playoff wins. And, yet, Jones has molded the Cowboys franchise into a $4 billion juggernaut and the most valuable pro sports team on the planet. That's right -- on the planet. (The Cowboys recently surpassed Spanish soccer club Real Madrid as the most valuable sports team.) One of the primary reasons for the Cowboys rise to this mountaintop of the sports world is the NFL's television deal that Jones was largely responsible for creating. Not only has he made the Cowboys more valuable, he's made every team in the NFL more valuable.

As a life-long Cowboys fan, I've had my misgivings about Jones, particularly his insistence on being owner, president and general manager. Many critics have said that he should bring in "football people" to focus on the team while he focuses on what he does best -- run the business end. Why does he need to have his finger in every pie? Why does he seem more interested in making money than winning championships? Can't and shouldn't he do both? (Pop psychologists can now join in.)

My misgivings created an image of Jones in my mind that was, to say the least, not a positive one. I've often thought that as long as he's in charge the Cowboys will never win another Super Bowl. But I've always known that my image of someone doesn't necessarily reflect who that person really is. And unless I know them intimately, my image is necessarily limited. So I try to give a person the benefit of the doubt and look for evidence that paints a different picture than a person's public image or the image of a person I have in my own mind.

That's why I was pleased when Joe Buck, the outstanding sports announcer, had Jones as a guest on Buck's Undeniable with Joe Buck series in which he spends one hour interviewing sports icons. (You can watch the interview here.) Each interview follows a pattern in which Buck takes the live audience and TV viewers through a chronology of the icon's personal and professional life. Buck's approach provides insight into the life and personality of each icon that the public rarely if ever sees.

The interview was one of the most moving I've seen of anyone in any context. Jones cried throughout it. He became especially emotional as he recounted how his own father counseled and supported him. He gave his father and mother a ton of credit for helping him become successful.

He became even more emotional when Buck brought up how involved Jones' children are in running the franchise. His sons Stephen and Jerry, Jr. and daughter Charlotte are all executive vice presidents. Jones noted how they've been involved in the business at some level since he bought the team.

But it's what he said about his children within the context of all he's accomplished before and since he bought the Cowboys that will forever change my image of him.

Nothing, nothing has ever meant as much as what you get to do with those (my) kids.

It wasn't the words that moved me as much as how he delivered them -- with such a clear, deep passion that reflected how his children reside on the mountaintop of his own life. Another example of how important his children are to him is when Charlotte told Buck as he prepared for the interview:

I've never hung up the phone with my dad where he didn't say, "I love you, now."

Say what you will about Jones and the lack of success of the Cowboys on the field. But in addition to he undeniable fact that he's built the Cowboys into the most valuable sports team on the planet, it's also undeniable that he loves and cherishes his children even more than he cherishes the Cowboys.

And that's how it should be.