Posted by Erik Vecere November 22, 2022
Learn How A Crucial Partnership Will Open The Door to Reducing Child Abuse and Neglect
Imagine my excitement when I received word that an organization called SCAN (Stop Child Abuse and Neglect) wanted to... END_OF_DOCUMENT_TOKEN_TO_BE_REPLACED
Posted by National Fatherhood Initiative November 15, 2022
Equipping Fathers and Organizations to Be More Father-Inclusive with Christopher Brown
Posted by Melissa Byers November 9, 2022
Trauma-Informed Care for Fathers and Families [Training + Free Resource]

Research to Application: The Power of the "Deviant Dad" 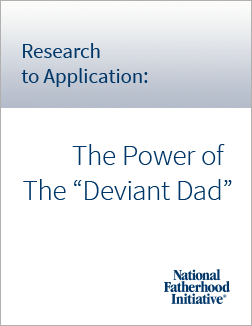 The series offers a platform for generating dialogue among NFI, organizations, and practitioners on ways that research can be applied to addressing pain points in serving fathers. This post is the second one in the series. (To access the first post, click here. To access the second post, click here. To access the third post, click here.) It provides ideas on how you might integrate research on positive deviance into your work with fathers. Integrating this research can help you identify model fathers who have overcome great odds to become involved, responsible, committed fathers, models you can share with other fathers who struggle to do the same.

The Research
In the Power of Positive Deviance (1), Richard Pacale, Jerry Sternin, and Monique Sternin chronicle the research and share many diverse examples of how professionals have used positive deviance to create positive behavior change in populations across the globe. Don’t be thrown by the negative connotation that the word “deviance” might have for you. As the authors point out, positive deviance refers to “outliers who succeed against all odds.” Furthermore,

Positive deviance (PD) is founded on the premise that at least one person in a community, working with the same resources as everyone else, has already licked the problem that confounds others. The individual is an outlier in the statistical sense—an exception, someone whose outcome deviates in a positive way (emphasis added) from the norm.

They share examples of how professionals have created programs to address such wide-ranging subjects as improving child nutrition (Vietnam), reducing female circumcision (Egypt), reducing hospital infections (United States), and reintegrating abducted girls—turned into soldiers after abduction—back into the community (Uganda).

What links all of these examples, and is a hallmark of using positive deviance, was the use of ethnographic research methods, primarily observation, to identify outliers who engage in positive behavior (i.e. the innovation in the community) to produce the outcomes the professionals sought (e.g. children who were well nourished and girls who weren’t circumcised), and then to understand the steps (process) that the outliers followed to produce the outcomes. The professionals used what they learned to design programs that had community involvement—indeed that were primarily community run—that spread knowledge and skill development related to the behaviors that led to the positive outcomes.

Another example in the book, which is relevant to working with fathers, involved the use of positive deviance by the international non-profit Save the Children to reduce infant mortality among the Pashtun-speaking people who live in the remote mountains of northwest Pakistan. The following description uses excerpts from the book. (Pardon the length of this example. The length provides the breadth necessary to grasp the power of using positive deviance.)

The point, of course, was to reinforce the focus on the effect of PD practices and to highlight the importance of the participation of both mothers and fathers in the survival and well-being of their children.

The point, of course, is not that this example has direct application to increasing father involvement in this country. It shows, however, that even in a culture in which fathers were involved only at the margins in an aspect of child well-being that the use of positive deviance can overcome extremely challenging barriers to greater father involvement.

Ideas on Application
The PD approach the authors outline involves much more than simply finding outliers. It involves getting a community to own a problem and then mobilizing the community to solve the problem. Nevertheless, you can use the “finding outliers” portion of this approach to identify models of fathers who have overcome great odds to become an involved, responsible, committed father that you can share with other fathers. You might also be able to involve fathers in developing an approach that will help other fathers to overcome great odds. Involving model fathers to influence other fathers will increase buy-in from other fathers because the solutions come from and are delivered by fathers like them. Here are some ideas to consider.

Keep an open mind to how the father overcame the odds. Resist judging his solutions. Pay particular attention to uncommon or unusual solutions the father developed. If after he shares his experience you think he provides a good model for you to share with other fathers, ask him whether he’d be willing to share his story. He could share through you via a case study you could write on his story. If he is part of a group of fathers you work with, ask him to share during a group meeting/session.

Regardless of how you apply positive deviance, approach your effort as an experiment. Keep track of what works with fathers in general and with specific kinds of fathers (e.g. custodial and non-custodial) so that you can apply what works in future work with fathers one-on-one or in groups, and avoid what doesn’t work. And last but not least, share your results with NFI at info@fatherhood.org so that we can improve future versions of this guide.

Resources
As you apply positive deviance to identify models of fathers who have overcome great odds to become an involved, responsible, committed father, consider reading The Power of Positive Deviance. We also recommend the book Switch, which discusses a similar idea the authors call following the “Bright Spots” (i.e. find what’s working and “clone it.”). This similar idea is part of a larger framework (the Switch Framework) that you might find useful in your work.

Get the full PDF version of this study today!