Posted by Christopher A. Brown January 31, 2023
The Value in Customizing a Fatherhood Program
There’s a lot of emphasis these days on implementing fatherhood programs with fidelity. Indeed, many funders of... END_OF_DOCUMENT_TOKEN_TO_BE_REPLACED
Posted by Ave Mulhern January 24, 2023
A Few of My Favorite Things… and they are FREE!
Posted by Christopher A. Brown January 17, 2023
How Father Involvement and Bi-Strategic Parenting Positively Affect Children’s Brain Development

Why is Daniel Murphy's Paternity Leave a Story?

I realize that there's some inherent level of stupidity in "viral" discussions, but still, what seems to be behind the latest argument is surprisingly anti-fatherhood. 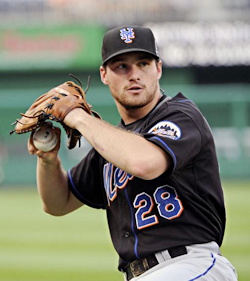 Earlier this week New York Mets second baseman Daniel Murphy exercised a clause in his Major League Baseball contract that allows him to skip a few games for paternity leave so he could be present at his first child's birth, and subsequently stay with his wife and new baby for a few days before he goes back to his grueling pro athlete schedule.

In response, a couple of sports commentators at WFAN radio in New York City not only criticized him on air for not prioritizing his obligation to the team properly (they apparently think paternity leave is stupid and not for "real men"), but even suggested that his wife should have had a c-section so the birth would have been more conveniently scheduled between Mets games.

Obviously, these two guys are chowderheads just looking for publicity (which I'm trying to avoid by not naming them here), but it still raises the question: why is this a story that's gotten any attention in the first place?

I believe Murphy is absolutely right to make this decision regardless of the consequences for the NY Mets baseball team, and that the WFAN commentators are just showing that they deserve our pity and our sympathy for being knuckle-dragging primates in the modern world.

What's your take? Should the needs of the team ever outweigh family, and if so, when?

And congratulations to Daniel and his wife on the addition of a new family member.