Posted by National Fatherhood Initiative August 2, 2022
Parenting Styles – Which One is Best?
We came across this article on parenting styles that is valuable for anyone working with fathers and families. The... END_OF_DOCUMENT_TOKEN_TO_BE_REPLACED
Posted by Melissa Byers July 26, 2022
New Data Finds the “Success Sequence” Effective Across Every Demographic
Posted by Erik Vecere July 19, 2022
How to Use A Logic Model to Supercharge Your Fatherhood Outcomes

25 Years of NFI: Featuring Sara Persons of Children and Families of Iowa 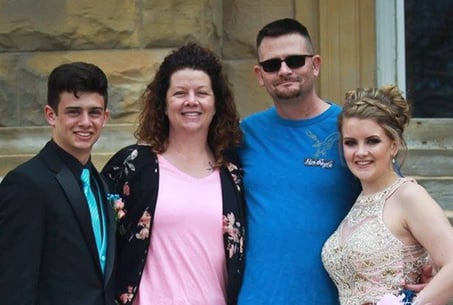 To celebrate National Fatherhood Initiative®’s (NFI’s) 25th Anniversary, I want to introduce you to Sara Persons, a “fatherhood champion” who has been an amazing partner of ours for many years.

Sara is a program supervisor at Children and Families of Iowa (CFI), which provides a broad spectrum of family engagement work (e.g. therapy, substance abuse, tracking & monitoring, child care, domestic violence, risk & permanency services). She oversees the Iowa Parent Partner Program (PPP), a contract with the Iowa Department of Human Services that covers all 99 counties throughout the state.

Sara has spearheaded work to recruit fathers and provide father-specific services and resources as part of the PPP. She connected with NFI when she had staff research programs and curricula who, then, recommended that they use NFI’s 24/7 Dad® program. Her agency was later approached to do work with incarcerated dads, which they also decided to use 24/7 Dad® for because the facility they were working with was considered a “release-type” prison where men would be released within a year and could continue 24/7 Dad® once they were released.

I had the opportunity to talk to Sara and dig deeper into her personal passion for fatherhood work and some of the successes and challenges she’s faced over the years.

How did you come to be in this position?

“I started with CFI in 2005 doing in-home, part-time work since I had two kids at home. From there, I went fulltime, which eventually led to a supervisor role. In 2007, the state started to roll out the PPP and my agency bid for a two-county contract and got it in 2008. I started as the parent partner coordinator for two local sites, which expanded over two years to eight counties and then a state contract was put out in 2013. That’s when CFI received the state contract and I was promoted to the state coordinator position.”

“I grew up in a middle-class home with both of my parents who were married. I didn’t really know that my life wasn’t normal, but at the same time it was normal because my father was an alcoholic. He committed suicide in 2002 at the hand of his addiction. I was in college at the time and he committed suicide the Friday before my senior finals. I knew nothing about addiction at that time. I knew nothing about child welfare or about any of that world. Through his death, I learned there was a treatment facility in our town that we had grown up in; it was a small town in Colorado. I had no idea, I just knew what I saw on TV: you just got on a plane and went away for 30 days; you got better; you came home. I was very ignorant to addiction and how it impacted families. I had decided, then, that I was going to learn more about it and how I could help families and children so they don’t have to go through what I did.”

Draw me a picture of the community you work in and how fatherhood is viewed.

“This is a relatively rural area of Iowa and through our fatherhood programming and our Wapello County Fatherhood Initiative (which is still going strong six years later), we’re still holding fatherhood events, being more aware of the father role, and encouraging dads to be more involved. Our work with the Department of Human Services (DHS) is showing more and more dads whose children are being placed with the dads.

24/7 Dad® has always been our biggest group, whether they’re DHS involved, Department of Corrections (DOC) involved, or just members of the community. It’s a great mix of community that comes together and support one another during the fatherhood events.

I think people are starting to realize that dads should be involved. We had one specific member of our Wapello County Fatherhood Initiative who shared the following story: she had a child who was having outpatient surgery. When she and her husband went to check the child in, the nurse was looking at, and directing all conversation, towards mom. And because she was more self-aware, being a part of this initiative, she just stopped talking and turned around to start playing with their kid, so that the nurse had to engage dad in the standard questions about the child. It was automatic that the nurse was just engaging mom… and dad wasn’t a part of the conversation. I think bringing self-awareness has a ripple effect.”

“Generationally and historically, I think we know moms have been a big player in their children’s life and typically deferred to as the nurturer and the one that keeps the family together. But, dads need to know that they are just as important and their children need them. Just as they need mom, they need dad to show up for sporting events, Christmas concerts, or anything they’re involved in.”

My understanding is you are using NFI’s 24/7 Dad® program, is that correct?

“Yes, we are using it both in the prison and in the community. We’ve always had peer-led groups who are dads that have graduated from the program. We did a Spanish-speaking 24/7 Dad® peer-led class once in partnership with our local community college and paired up the peer facilitator with one of the college’s professors.

We currently have five 24/7 Dad® groups going in 11 counties. We will run the 12-week program in one county and then move it to a different county for another 12 weeks.

In those places where we run the 24/7 Dad® groups, we also offer NFI’s Understanding Dad® program for moms. We really want to engage mom and dad. Through one of our contracts we’re able to provide child care and gas cards so there’s some incentive that takes away some of those barriers that prevent mom and dad to attend the groups at the same time. Sometimes a mom will encourage the dad to go to 24/7 Dad® while she’s at Understanding Dad®. Sometimes dad will be the one to let the mom know there is a group for her. These programs are recognized by DHS and our local courts, so they are well supported.”

“They’re not parenting programs where the parents come (in either group) and are preached to. They’re really about evaluating their own self, their own parenting skills, their own childhood and collectively, as a group, asking, ‘Is that best practice? Is that what’s best for my family? Did I learn something earlier in life that maybe isn’t the best way?’ They’re able to get feedback from the whole group. So, it’s not just somebody sitting there talking to them for 12 weeks, but instead, it’s very interactive. I really like that piece of it.

We have dads who complete an evaluation at the end of the program and say, ‘I got to hear some ideas from things that other dads were doing that I hadn’t ever thought about.’ That peer support piece is great.”

What is the most inspirational “father story” you have experienced?

“Dads will reach out and say things like, ‘things are going great, I’m back in my kid’s life,’ or ‘if it wasn’t for this group I wouldn’t have addressed unhealthy areas.’” Our fatherhood coordinator started as a participant in 24/7 Dad® when he was incarcerated and was trying to parent, knowing he would need to do everything differently when he got out. He stayed connected to 24/7 Dad® because he knew if he kept his kids at the forefront, that would be his motivation to change. And he went through a lot of changes. At the end of his story, his is now a single dad with both of his daughters living with him.”

What advice would give to other practitioners who are working with fathers?

“You have to meet the dad where he’s at and you have to empower him because those types of skills are life-long. Dads parent their children the way they were parented. Sometimes, they don’t realize things are good, bad, or indifferent until they’re able to have that ‘a-ha’ moment through conversations and peer learning…and it takes longer than 12 weeks. When you encourage and empower dads, good things start to happen.”