Posted by Christopher A. Brown January 31, 2023
The Value in Customizing a Fatherhood Program
There’s a lot of emphasis these days on implementing fatherhood programs with fidelity. Indeed, many funders of... END_OF_DOCUMENT_TOKEN_TO_BE_REPLACED
Posted by Ave Mulhern January 24, 2023
A Few of My Favorite Things… and they are FREE!
Posted by Christopher A. Brown January 17, 2023
How Father Involvement and Bi-Strategic Parenting Positively Affect Children’s Brain Development

3 Ways To Make Your Marriage Better By Tonight

It's National Marriage Week and considering I've been married over 12 years, I've learned a thing or two. Okay, I've learned three things. Now, I don't write this post as the perfect husband, just ask my wife. But, you don't have to be perfect to know a thing or two or three about what works and what doesn't.

Whether you're reading this and you're married, or you work with fathers and families who are currenting struggling through relationship issues, here are three things worth doing (or sharing with the married folks in your circle) today to make an impact on the marriage—not months from now—but by tonight. 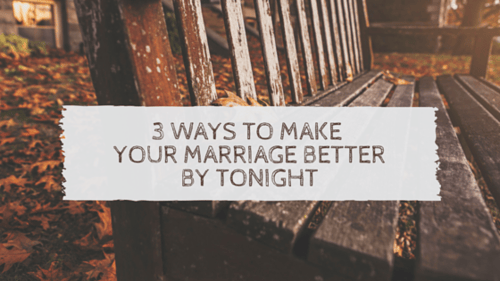 1. Give a Genuine Compliment.
Everyone likes a compliment. But, don't be manipulative here. The point is to say something genuinely positive. A compliment, by definition, is a sign of acknowledgment and appreciation. My plan by this evening? Make a list of 10 things that I love about my wife and tell her.

1) I'll be reminded of how much I appreciate my wife and...

2) My wife will be wooed (because the list will be thoughtful and unexpected of course. Also, because my wife doesn't read my blog posts!).

Now, isn't that the goal of a marriage? To woo one another! You don't need to create this list, but you get the idea. Give a genuine compliment before tonight.

2. Be Affectionate.
What in the world am I talking about here? Research shows that touching creates a stronger bond by releasing Oxytocin. So hold hands, rub shoulders, hug, kiss, give fist-bumps, whatever. But be sure you're affectionate. I'm terrible at this. But, don't let a day go by, if possible, without being affectionate.

What I'm about to share with you doesn't sound romantic; but, I have a reminder item set on my phone that simply says "Kiss Tonia". It's set to repeat daily. I have to manually mark it off of my list in order to move to another reminder task. Imagine seeing this reminder, marking it off, and then not doing it. That'd be crazy! The point? Do what you have to do to be affectionate. Go on, release that Oxytocin.

3. Talk to Each Other.
Even if it's only for 10 minutes, hide from the kids and talk. Talk before bed if possible. Relive old memories of you as a couple out loud with your spouse. I've read that doing this changes your mindset and ultimately how you think about your relationship.

So, think of something awesome, first date or something else awesome, and talk about it with your spouse tonight. Did you ever go on a picnic or share any good dates together?

When my wife and I were dating in college. In an attempt to be thoughtful, I bought tickets to The Phantom of the Opera so we could share the experience together. We had separately attended the show on Broadway in NYC while on High School trips (separately, as in, different High Schools during different years).

I bought tickets to The Phantom while it was on tour in Nashville, Tennessee. Thinking I was doing something awesome by purchasing seats in the first row, we attended only to find that the first row was the worst spot in the theater. We were too close! Hindsight tells me this is why front-row tickets were available at my college budget, but I digress.

Basically, it's now a running joke between us because we could barely see the stage and certainly missed a lot of the set design because of my "great" tickets.

While we had fun, I don't remember the show at all, my only memory is of feeling embarrassed for purchasing front row tickets. Imagine us talking about that show today. It's certainly a good memory at this point—or at least a funny one. We've attended many concerts since The Phantom, but I haven't purchased front row since then.

My guess is that when you start talking about one thing, you’ll launch into other memories. Carving out time can seem daunting with kids. Depending on the ages of your kids, talking to each other can seem impossible. But try it this evening.

The point here is to not make these times of talking into business meetings. This is where I often go wrong. I start complaining about money or chores and this precious time goes wasted—or worse—creates problems. Don't be like me on this point. There should be time for administrative talks, but not during this time of talking. Keep it meaningful and about you as a couple—save the administrative stuff for another time.

One more thing…
Marriage is like life, you're either swimming toward a destination or you're drifting aimlessly. The natural drift of a marriage is to get busy with work and kids and drift apart.

Don't drift apart. Swim toward each other. Nothing is more important than your marriage so nothing should take priority...not careers, children, personal goals...nothing. When you make your marriage your top priority, your marriage will not only be better, but your personal life will be better. Don't worry, your kids may not understand now, but they will thank you later.

What do you do to keep your marriage awesome on a daily basis? Seriously, tell me. I could use some good ideas!