Posted by Christopher A. Brown June 28, 2022
Teach Dads These 3 Qualities of Successful Fathering
“Habits may be the smallest units of transformation, but they’re also the most fundamental. They are the first... END_OF_DOCUMENT_TOKEN_TO_BE_REPLACED
Posted by Ave Mulhern June 22, 2022
24/7 Dad® - Worth the Wait
Posted by National Fatherhood Initiative June 16, 2022
[Father’s Day Special] The CHI Podcast featuring NFI President Christopher A. Brown: Why Dads Matter

6 Steps to Deal with Fears for Your Children

What frightens you the most as a parent when it comes to your children's health? Before you read any further, take a few minutes to write down your top three fears using a broad definition of health that includes physical, social and emotional health. Then, rate your level of fear for each one on a scale of 1 to 10 with 1 being "not fearful at all" and 10 being "very fearful." 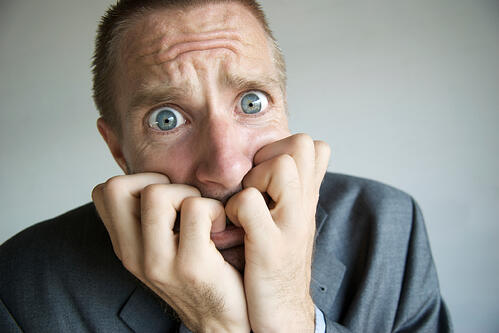 What I fear most is that my children will get in a horrible accident that will change their life for the worse or even end it. When my younger daughter Jillian was 2 years old, we were playing on the living room floor with Daizy, a Labrador-Greyhound mix we had rescued from the pound only days before. This get-to-know-you play session suddenly turned into one of my scariest parenting moments. As Daizy laid down to rest in front of me, Jillian scurried around my back and, in coming around to the front of me, startled Daizy. Daizy lept up and accidentally swiped Jillian's face with her paw. For a moment, it seemed nothing was wrong because Jillian's only reaction was to close her eyes and look stunned. But then, the blood started flowing down her face -- appearing to originate from one of her eyes -- and she began to cry and scream.

After a moment of indecision, I quickly removed my shirt and placed it over her face. Fortunately, a couple of EMTs lived two houses down from us. I grabbed Jillian and ran over to their home and, as I ran, prayed they were home. I knocked on the door and, thank God, both of them were home. I explained what happened and partially removed my shirt from Jillian's face so they could assess the injury. The blood started to flow once more. I reapplied my shirt until one of the EMTs wrapped Jillian's head in so much gauze it looked as though she was wearing a turban that had slid down her face.

By this time, I feared the worst -- Daizy has slashed Jillian's eye and she'd have permanent damage. Being EMTs, my neighbors assured me that they had seen much worse and not to jump to conclusions. One of them rushed us to the nearest hospital for treatment. Fortunately, Daizy had only caused a gash above Jillian's eye and slightly scratched the inside of her eyelid. The eye itself was unharmed.

I'm generally not a fearful parent. Even though I fear accidents the most, I rarely think about whether they might happen. But every once in a while, the scar that Jillian still has from that awful day reminds me how much I love my children and don't want any harm to come to them.

Every year, the C.S. Mott Children's Hospital at the University of Michigan conducts a national poll on parents' top health concerns. The 2014 poll asked parents to rate how big of a problem 26 health concerns are for children and teens in their community and, separately, for children and teens across the country. They rated each concern as a "big problem," "somewhat of a problem," or "not a problem." The survey is a kind of proxy for what parents fear when it comes to children's health.

According to the 2014 poll, the following eight concerns appeared in the top 10 concerns on both lists:

Childhood obesity topped both lists, with the others in each list ranking differently in terms of level of concern.

Now, look at the list of your top three fears. Are they included in the list of eight above?

A much more important question is whether your level of fear for each fear is founded. (That's why I asked you to rate your level of fear.) Fears have a nasty way of working behind the scenes to cause stress and guide our behavior in unproductive and sometimes destructive ways. Parents' fears can cause a ton of stress and lead to behavior that damages their relationships with their children. As I wrote in my last post, parents these days are particularly vulnerable to over-protecting and controlling their children's lives. This behavior results from fears (and concerns) they have that, in many cases, are unfounded.

Follow these steps to determine whether any or all of your fears are founded.

As you read through those steps, you might have thought "Ugh! It's going to take a lot of time to complete them, and I just don't have the time." It will take some time, but not as much as you think. Regardless, when it comes to your children, taking time to examine whether your fears are founded is vital to understanding whether the stress they cause and the behavior that results from them is worth it to you and the relationships you have with your children.

Here are some websites on children's health for further reading: