Posted by National Fatherhood Initiative August 2, 2022
Parenting Styles – Which One is Best?
We came across this article on parenting styles that is valuable for anyone working with fathers and families. The... END_OF_DOCUMENT_TOKEN_TO_BE_REPLACED
Posted by Melissa Byers July 26, 2022
New Data Finds the “Success Sequence” Effective Across Every Demographic
Posted by Erik Vecere July 19, 2022
How to Use A Logic Model to Supercharge Your Fatherhood Outcomes

Be Concerned About Depression in Dads 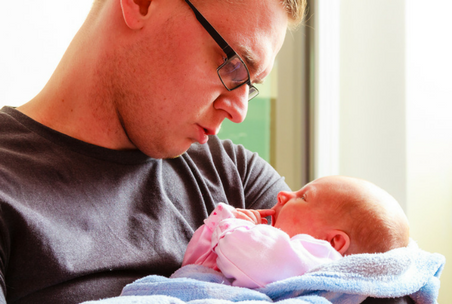 A friend of mine recently welcomed his second daughter into the world, 16 years after welcoming his first. She was born 8 weeks premature and weighed only 4.5 pounds. She’s still in the neonatal intensive care unit (NICU).

Fortunately, she was heavier and better developed than many preemies at that stage. She’s returned to and surpassed her birth weight, and is off her feeding tube and breastfeeding. She should come home to her parents any day now.

Having a baby in the NICU is tough on parents. It can exact harsh financial and emotional costs. Two of the most significant emotional costs are stress and depression.

Only recently, however, has research examined the impact on parents when their baby comes home from the NICU, an event that on the surface seems it should be a happy one that reduces stress. We now know it stresses dad more than it stresses mom. While both parents experience high-level stress before their baby is discharged, dad’s stress increases during the first two weeks at home while mom’s stress stays constant.

The fact that I ran across this study just a week or two after the birth of my friend’s daughter was serendipitous. While I wasn’t surprised to learn that dads of preemies are stressed—my friend has been very stressed since her birth—the insight from this research gives me further concern about his well-being after she comes home.

I’m further concerned for him for another reason—the potential long-term effects of this increased stress, which include depression. If he doesn’t acknowledge and address his stress, it could become chronic. Chronic stress can cause depression. My friend could be at risk for the double whammy of stress and postpartum depression. Even if his daughter had been born full-term, he might have become depressed. We’ve known for at least a decade that even dads with full-term babies can experience postpartum depression.

My friend’s situation caused me to consider my work with National Fatherhood Initiative (NFI). Might my new insight lead to some advice and guidance for those who serve dads?

What I found concerned me, and should concern you.

My investigation led me to the work of Craig Garfield, an associate professor of pediatrics and medical social sciences at Northwestern University. He has found that the first five years after a child’s birth is the riskiest time for paternal depression. Young dads in particular (age 25 or less) are especially susceptible. Their depression increases by nearly 70% during a child’s first five years.

The first five years are so vital in a child’s development. Other research from Garfield has found that depressed dads are:

As a result, the children of depressed dads are more likely to have developmental delays and behavioral problems.

The teen years are also a critical time in a child’s development. Depression in teens can have dire consequences. Depressed teens are:

The consequences of teenage depression don’t magically disappear. They extend into adulthood. These teens are more likely to become adults with financial struggles, who divorce, and who try or commit suicide.

The implication of this research is clear.

If you’re concerned that a dad is depressed, refer him to a trained professional (e.g. family doctor or therapist) to determine whether he is depressed and, if so, provide him with or refer him to the help he needs. As the UK researchers point out, men are less likely to seek help for depression. A dad might need some extra encouragement to seek help.

Remember that the help a depressed dad gets now will help him and his children for years to come!

Are you aware that depression can strike dads at any stage of their fatherhood journey?

If you become concerned that a dad might be depressed, do you have a list of professionals to refer him for help?