Posted by Ave Mulhern January 24, 2023
A Few of My Favorite Things… and they are FREE!
You may know that National Fatherhood Initiative® (NFI) is the nation's leading provider of fatherhood research,... END_OF_DOCUMENT_TOKEN_TO_BE_REPLACED
Posted by Christopher A. Brown January 17, 2023
How Father Involvement and Bi-Strategic Parenting Positively Affect Children’s Brain Development
Posted by Erik Vecere January 10, 2023
One-On-One Delivery of NFI Programs – So Simple, So Effective!

Vinny on the Rocks 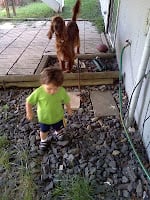 In keeping with NFIs July theme of hitting the Great Outdoors, I hit the Mediocre Outdoors with my 18-month-old son last week. We went into my backyard.

Being the thoughtful father that I am, I actually had a real goal in taking Little Vinny back there. It was a nice day out, he had been watching an Elmo video for a while, and I figured he needed some free play in the fresh air in order to develop properly.

So, there we were in my fairly large, fairly green backyard, and I just let him go to see what he would do. I had visions of him scurrying across the grass, wind blowing through his hair, giggling at the sheer joy of experiencing the wonders of suburban nature.

In addition, there was a dog in the backyard (his name is Junior and he is our dog), there were toys on the lawn, and the property has a few shaded corners under tall pine trees. Lots of great places for a curious kid to explore. This was going to be Great (or at least Mediocre).

Instead, Little Vinny decided to head right for the ugliest, most dangerous place in the entire yard  a small pile of sharp rocks underneath the deck.

This pile of rocks comes complete with a rusty iron rod sticking straight up out of the ground, whose purpose I have yet to determine in nearly three years of living in this house. There is also the rusty outdoor faucet sticking out of the concrete wall. And last but not least is the scramble of electrical wires populating said concrete wall. It would have been disastrous had he pulled on one of these dangerous, live wires  I would have lost my DirecTV service. But I digress.

So this is where my child decided he wanted to play.

My first instinct was to pick him up and move him into the middle of the lawn. I did this. He promptly turned around and returned to the dangerous pit in the darkness of the decks shade.

Then he started picking up the sharp rocks and throwing them. Some of them were hitting the concrete wall and bouncing back in his direction, missing his bare (chunky, adorable) legs by inches.

Then he started walking around the perimeter of his private quarry with one of the larger rocks in hand. I pictured him opening his fragile little hand, revealing a deep, bloody gash across his palm, smiling sinisterly at me and asking me to perform some tribal rite. Although that didnt happen, I continued to operate under the illusion that he just hadnt yet noticed the big, beautiful backyard.

So, I once again picked him up and placed him in the middle of the grassy yard. The sun was shining in his light brown curls. There was a glimmer of hope. I even recruited the dog into my effort to make the grassy part of the lawn fun. I did this by pointing at the dog and then pointing at Vinny. The dog looked at me stupidly. As I contemplated his dumb look, Vinny returned to his pit.

At this point, I gave up.

But after a few moments of reflection, a peace came over me. I reminded myself that if I was really interested in him exploring and having free play, then I would have to deal with whatever it was he decided to do. I saw that he probably liked walking on the rocks because it was a very different surface than what he is used to  uneven, a little shaky, and the rocks made neat sounds as they scraped together under his feet. He also likes to touch things, and the rocks would actually be sort of interesting from a toddlers point of view. They were black, cold, and fit perfectly in his eager hand.

He was happy. So, I decided to be happy, too. I just sat back and watched him start his mining career. So, this is what it is like experiencing the great outdoors with your child, I thought to myself. As I thought this profound thought to myself, I also said, Myself, are those mosquitos biting you? I then came to a sudden realization that my legs were an itchy mess. I was getting killed by mosquitoes, so I decided to cut our excursion short and take Vinny back inside.

When I picked him up, he still held one of his rocks in his hand. I made him put it down on the deck before we went inside, and it is still lying there, a week later, as a reminder.

A reminder of my wonderful time in the backyard with my son?

No, a reminder that, for unknown reasons, I have a pile of sharp rocks under my deck! Why are those even there?! While I look into this, I wish you many grand adventures in your little piece of the outdoors, wherever, or however dangerous, it may be.