Posted by Ave Mulhern January 24, 2023
A Few of My Favorite Things… and they are FREE!
You may know that National Fatherhood Initiative® (NFI) is the nation's leading provider of fatherhood research,... END_OF_DOCUMENT_TOKEN_TO_BE_REPLACED
Posted by Christopher A. Brown January 17, 2023
How Father Involvement and Bi-Strategic Parenting Positively Affect Children’s Brain Development
Posted by Erik Vecere January 10, 2023
One-On-One Delivery of NFI Programs – So Simple, So Effective!

Sep 27, 2010
Share
I never thought that being sick and up past midnight on a Thursday could be so awesome.

Vinny, our little guy, had caught something at day care last week, and by Tuesday we were both sick. I had a cough and congestion; he had a runny nose and respiratory issues. By Thursday night, his breathing had become labored and he was wheezing. My wife was more concerned about his breathing than I was. Chalk it up to a difference between moms and dads, I guess.

So she decided to call the doctors office (the answering service actually), and when we got a call back from Vinnys doctor, she suggested that we take him to the all-night medical clinic.

We got there at around 8:30 p.m. After filling out many forms and waiting for many long minutes, we finally saw a nurse and a doctor. They put Vinny back on the nebulizer, making this the third time he has had to use it. They also gave him a dose of steroids to reduce the inflammation.

By the time this was all done, it was midnight. We were finally at the front desk checking out, and I was filling out more forms. My own congestion and coughing were getting worse, and I was falling asleep on my feet.

You may be wondering where the awesome part of this comes in...

Well, as I was filling out some medical form, I looked over at Vinny sitting in my wifes lap. He was about 20 feet away. When he saw me looking at him, he flashed the most beautiful smile. I smiled back at him and said, Hey Vinny!

With that smile, my discomfort from the last 4 hours disappeared. My congestion and fatigue diminished.

I realized at that moment that this was not about me.

I get miniature versions of this feeling when I look at my son sleeping at night. I realize that even if I thought my day was bad that it was actually perfect if, at its end, my son is sleeping peacefully and comfortably in his crib.

In light of recent articles about hating our lives, but loving our children, which I blogged about here, my sons midnight smile at the 24-hour medical clinic reconfirmed to me that when you love your children, and you are dedicated to their lives, nothing can make your own life less than beautiful. 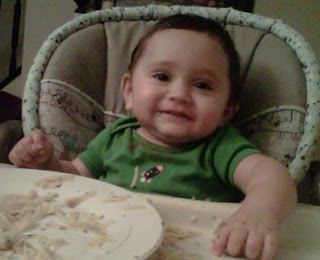