Posted by Christopher A. Brown January 31, 2023
The Value in Customizing a Fatherhood Program
There’s a lot of emphasis these days on implementing fatherhood programs with fidelity. Indeed, many funders of... END_OF_DOCUMENT_TOKEN_TO_BE_REPLACED
Posted by Ave Mulhern January 24, 2023
A Few of My Favorite Things… and they are FREE!
Posted by Christopher A. Brown January 17, 2023
How Father Involvement and Bi-Strategic Parenting Positively Affect Children’s Brain Development

Boogie Board Memories and Sandy Snacks

Jul 25, 2011
Share
This is a blog post by Jason Katoski, NFI's Jr. Staff Accountant. Jason shares his memories of beach vacations with his dad and now with his two kids as part of NFI's campaign to help dads "Get Out: Hit the Great Outdoors with Your Kids This Summer."

The first thing that comes to mind when I think of July is the beach. As a child, my family would go to the beach every year (typically the week that the MLB had their Home Run Derby Contest and All-Star Game) and it was always the highlight of my summer. My favorite memories from the beach were when I would be on a boogie board in the water and my dad would try to set me up to catch the waves. Sometimes this didnt work so well and a wave would wipe both of us out. That was always the best. 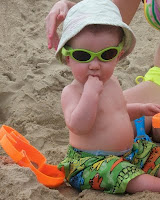 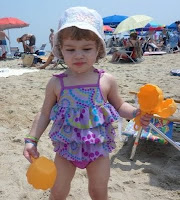 Now as a father of two kids (my daughter is 2 and my son is 7 months old) I have continued the tradition and we have been going to the beach with them every summer since 2009. We usually go for one weekend early in the summer to Ocean City and then later in the summer we go to Myrtle Beach for a week. Its great to play with my daughter who likes to run to the waves crashing on the beach and then run back before the waves get her. My son loves the beach so much that he has decided his favorite food is sand!