Posted by Christopher A. Brown January 31, 2023
The Value in Customizing a Fatherhood Program
There’s a lot of emphasis these days on implementing fatherhood programs with fidelity. Indeed, many funders of... END_OF_DOCUMENT_TOKEN_TO_BE_REPLACED
Posted by Ave Mulhern January 24, 2023
A Few of My Favorite Things… and they are FREE!
Posted by Christopher A. Brown January 17, 2023
How Father Involvement and Bi-Strategic Parenting Positively Affect Children’s Brain Development

This is a guest post by Dave Taylor. Dave has been living the single dad adventure for almost five years and continues to fight for equal access to his children, while trying his best not to explain to them the behind-the-scenes reality of life as a divorced, single man. You can read about his travails and musings at GoFatherhood.com or find him on Twitter as @DaveTaylor. 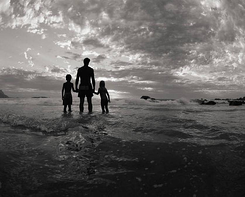 I'm a single dad. I have three children from my marriage, a 15yo daughter, 12yo son and 8yo daughter. I have the kids roughly 50% of the time, which makes me a really unusual person in the world we inhabit here in Boulder, Colorado. In fact, I was having a fascinating discussion with my teen just last night about the hassles of two households which, we're both convinced, just sucks. No great solution to the problem, but there's no way that it's an optimal arrangement for anyone, unfortunately.

She observed that none of the other kids in her high school class bounce back and forth like she does, to which I commiserated and made my usual suggestion: "just come live with me".  We talked a bit further, and she shared that almost half of the kids in her class come from broken homes, but that in every other case, the dad's vanished. Either he's literally in another state, he's missing in action or he's either been pushed out of the parenting role or abrogated it of his own accord. Her class of children have about 50% of the dads completely out of the picture.

I think it reflects a greater reality in our society as we fully enter the 21st century: men are being pushed out of the parenting role. I think that there are a lot of causes for this, including that a lot of us men are more interested in impregnating a gal than in stepping up and taking life-long responsibility for their offspring, whether it's easy or hard, whether the children are polite and respectful (read "compliant") or not. But that's not the only reason for this looming crisis, and a crisis it is.

I believe that our society has created the myth of the irresponsible father and that we now have men and, especially, women who buy into it so wholeheartedly that they don't believe there are honorable, trustworthy and reliable men still left. Watch the movies, endure a day of TV shows (especially daytime programming), or read contemporary best-selling fiction, that irresponsible man shows up everywhere! Just count, how often do you see men holding babies or grocery shopping in media portrayals?

What's happening is that we men, we fathers, are in danger of becoming second class citizens.

I know, I've seen it arise time and again, like when I would pick up my little girl at preschool and be the only man in the room. "Who are you? Why are you here? What's wrong with your wife that she isn't here for pickup?" was the constant vibe I got as i walked into the coatroom to wait. I've experienced conversations literally stopping when I walked in, like I was a gunslinger and they were in an Old West saloon.

Even years later, years into this experience of being a highly involved single dad, I experience a skepticism, a suspicion of my motives and comments about how I am so incredibly unusual when compared to most divorced dads. It gets old. And in my experience, not just our culture but the legal system also discriminates against men in both divorce proceedings and post-divorce issues.

A friend who is just starting down this lonely road commented to me a few days ago that he was thinking of trying to get full custody of his kids because his wife is an alcoholic, but realized that it would be just about impossible to win at that battle, however fabulous he was (and he's not, he's just a guy doing his best and occasionally challenged by his dark side, as we all are) and however horrible she might be (and she's not either, she just does what a lot of alcoholics do, unplugs and leaves the children to their own devices).

He's smack in the middle of the cultural morass that we've been stuck in since the 1950s, if not before: It's all too common for the outcome of a divorce to be that the children are fulltime with the mother and the father's role is writing checks and, if they're lucky, interacting with their children in very, very small amounts.

What's worse is that it's then a self-fulfilling prophecy: if you only see your children for one afternoon a week, you will indeed lose touch with them and they'll act up when they're with you because they don't know you. They act up, you're out of practice parenting, so you get angry and upset, then they go home and say how mad you were. Doesn't take long for that cycle to result in you being the Checkbook Ex with almost zero time with children you don't even know.

It's a cycle that I see too often in the divorce community and it's dangerous, not just for us men, but for our children. How will they learn what a healthy mother/father relationship is? Where will they learn what it is to be a father, to know what to expect from a good man who isn't the Prince Charming of teenage fantasies, and to work with us men to create healthy, successful family units again?

But this isn't just about divorce and single parenting, this is a more pervasive problem with the role of men, of fathers, in our culture. Thirty years ago men had a known, specific role in our family unit, the "wait 'till your father gets home" and 'father knows best" world of women as day-to-day nurturers, but fathers as pivotal members of the family too. Now plenty of us men are home, moms are working fulltime. Times have changed. Indeed, our expectations of relationships and our willingness to work towards success have changed. Isn't it time to make sure we're still moving in the right direction before we find that us fathers are obsolete?

The views expressed in this post do not necessarily reflect those of National Fatherhood Initiative.