Posted by Christopher A. Brown January 31, 2023
The Value in Customizing a Fatherhood Program
There’s a lot of emphasis these days on implementing fatherhood programs with fidelity. Indeed, many funders of... END_OF_DOCUMENT_TOKEN_TO_BE_REPLACED
Posted by Ave Mulhern January 24, 2023
A Few of My Favorite Things… and they are FREE!
Posted by Christopher A. Brown January 17, 2023
How Father Involvement and Bi-Strategic Parenting Positively Affect Children’s Brain Development

Octomom: Her Children, Her Choice and Our Responsibility 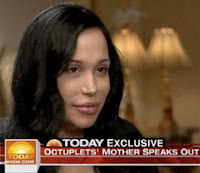 For anyone one who has followed Ms. Suleman's saga over the last three years, none of this should be a surprise. She has made a series of troubling and unwise choices, most notably her decision to have 14 children with no apparent financial means to support them. Alas, actions have consequences, and although one can choose their actions, no one can choose the consequences of their actions.

You might recall that much of the initial reporting about Suleman's decision to have octuplets was positive, even glowing. Our culture tends to respond to these kinds of "scientific miracle" stories like proud 3-year-olds showing our adoring parents a new skill, boasting, "Look what we can do!"

But the tone of the news stories soon turned negative, even vicious, as reports surfaced that Ms. Suleman was a jobless single mother with six more young children who subsisted on a combination of welfare checks, food stamps and student loans. The situation got even worse after a widely seen interview of Ms. Suleman by NBC's Ann Curry. Ms. Suleman reportedly even received death threats.

Why were (and are) so many so incensed by this situation? Is it because children are involved? Maybe, but there certainly have been worse stories that involved children. Maybe it is because Ms. Suleman does not have the money to support her family. Possibly, but could one really make that case in this season of billion-dollar bailouts?

No, I believe the real issue is that Ms. Suleman has been smugly putting in our collective faces something about ourselves that we do not want to see and refuse to acknowledge. Ms. Suleman's story exposes the fact that for the last few decades, our culture has been carefully constructing a modern-day "Tower of Babel" in celebration of "personal choice," especially in matters related to sex.

We have constructed this tower brick by brick -- one brick to unlink marriage from childbearing, another to unlink fatherhood from family life. We have been on a march to climb our tower without taking the time to consider the consequences.

Worse yet, any courageous soul who dares to try and stop us on our "upward" march is shoved from the tower, sans parachute, as an example for others.

Ms. Suleman, a learned product of our culture, knows our dilemma well, or at least got her money's worth from the many PR consultants who have coached her. For example, when Ms. Curry asked, "Why is it responsible for a single woman without a job... to have eight more children?" Ms. Suleman responded, "Yes, I have chosen to be single... If there is a couple... just together, why are they exempt from being called irresponsible?"

When Ms. Curry queried why her fertility specialist, who knew that she already had six children, transferred so many embryos, Ms. Suleman responded, "It's a subject of choice... so he did not judge me. [He was] Very professional."

Even when Ms. Curry tried to challenge Ms. Suleman by suggesting that children need a father, Ms. Suleman had all the right answers. She said, "I absolutely believe that. And they do have a father."

The problem is that Ms. Suleman, like many others, has chosen to view fatherhood as merely a biological transaction. In a culture where choice trumps all, who can "cast the first stone" at a woman who undervalues the need for children to have a physically and emotionally present father in their lives? This is despite reams of social science research that support the fact that children need involved dads.

In short, the more Ms. Curry tried to turn the mirror on Ms. Suleman, the more the mirror was turned back on the culture that produced her.

Indeed, the truth is that choices are never personal; they are always communal. Her children are our responsibility, too -- your tax dollars pay for the programs that support her choices. Ms. Suleman's story illustrates that in our politically correct, choice-saturated culture, there are more and more things that you dare not say. However, the problem is that there are fewer and fewer things that you dare not do.