Posted by Christopher A. Brown January 31, 2023
The Value in Customizing a Fatherhood Program
There’s a lot of emphasis these days on implementing fatherhood programs with fidelity. Indeed, many funders of... END_OF_DOCUMENT_TOKEN_TO_BE_REPLACED
Posted by Ave Mulhern January 24, 2023
A Few of My Favorite Things… and they are FREE!
Posted by Christopher A. Brown January 17, 2023
How Father Involvement and Bi-Strategic Parenting Positively Affect Children’s Brain Development

Holidays at the Hospital

This is a guest post by Dr. Ricky Choi. Choi is a pediatrician and Fellow of the American Academy of Pediatrics. He serves on the Board of Directors for the National Physicians Alliance and is a national leader of the American Academy of Pediatrics. He lives in San Francisco with his wife and two children. Find him at The Huffington Post and on his blog. He writes this post for NFI's "The 12 Dads of Christmas." If you are interested in guest blogging for us, send an email. 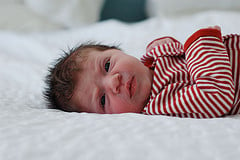 As a resident physician I spent a Christmas holiday working in the hospital. Because illness and accidents didn’t take a break during the holidays, someone on the physician staff couldn’t either. But I didn’t mind.

One of the many reasons I chose pediatrics as a specialty was the value staff placed on those things that were important to children. And for most kids, Christmas is a big deal. Though the inpatient unit was typically busy during the winter the pediatric staff made every effort to get kids home for Christmas -even if it only meant returning to the hospital 24 hours later.

So the few days before the big day were filled with commotion and hustle in the air. Some of the children required significant accommodations to make sure that they were safe to go home.

My arrival on the pediatric floor Christmas morning was met with silence. Piled high in front of the nurses station were wrapped presents donated by the local fireman which arrived after the mass exodus. Gone was the chorus of monitors beeping and mobs of staff rushing from room to room. The ward was, however, not completely empty.

Scattered throughout the ward were a handful of children who had stayed behind. The children with cancer needed their daily chemo or were too immunologically defenseless to go home. Having endured so much pain and hardship from their illness and the brutal treatment they seemed especially deserving of a holiday. Their families were there bright and smiling, desperate for something to celebrate. They savored each moment knowing that the only Christmas they were certain to have together was that day. The eery quiet in the ward made the laughter seem louder, the wrapping paper shinier, and the celebrations that much more festive. It was a day those children dearly deserved and their parents hoped to never forget.

New Traditions
After my eldest daughter turned 3 years old, I began taking her to newborn hospital rounds on Christmas morning. After the gifts were opened and the late breakfast eaten we gathered our things, me with my stethoscope, she with her colorful toy doctor’s kit. Then we hopped into the car with the hopes of seeing a Christmas baby at the newborn nursery.

During the ride we talked about caring for babies: washing hands and gentle touching. I described the joy that this family must be feeling to have such a special gift during the holidays. I recalled the immense joy I felt when she was born only a few years before.

This new tradition is a chance for my daughter to build a sense of connectedness with the lives of others. The most amazing part of being a physician is the privilege to be a part of peoples lives at the most meaningful of moments. Hopefully my children too will make caring for others inform their life choices. I can’t think of a better way to plant this seed than bringing her to a celebration for a new life on Christmas morning.

What's your most memorable Christmas and why?