Posted by Christopher A. Brown January 31, 2023
The Value in Customizing a Fatherhood Program
There’s a lot of emphasis these days on implementing fatherhood programs with fidelity. Indeed, many funders of... END_OF_DOCUMENT_TOKEN_TO_BE_REPLACED
Posted by Ave Mulhern January 24, 2023
A Few of My Favorite Things… and they are FREE!
Posted by Christopher A. Brown January 17, 2023
How Father Involvement and Bi-Strategic Parenting Positively Affect Children’s Brain Development

The “Tale of Two Fathers” Confirmed by New Study

I am having a hard time deciding how to respond to this report from the Associated Press on a new survey of fathers. 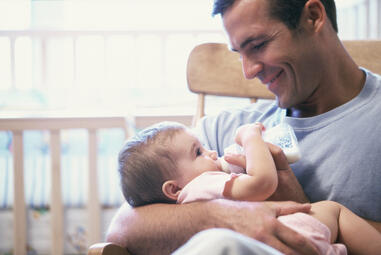 One the one-hand, I am encouraged by the positive spin put on the survey’s results, as reflected in the headline, “Dads Do Diapers and More, Myth-Busting Survey Says.” Indeed, the nationally representative survey of American fathers shows they are more involved in their children’s lives than they were in 2002. Moreover, the report points out the many positive effects this increased involvement has on child well-being.

The results are encouraging and important "because others have found the more involved dads are, the better the outcomes for their children," said researcher Jo Jones of the National Center for Health Statistics, part of the Centers for Disease Control Prevention. She co-authored the report released Friday.

However, a part of me is discouraged by what I see as a glossing over of the elephant in the room. The story goes on to explain how “most” of the survey’s respondents lived with their kids. Ding, ding, ding! The alarm bells sounded in my head. I knew it was too good to be true. So, what are things like for the 24 million children who DON’T live in the same homes as their dads? Well, the AP report points out that, “Not surprisingly, men who didn't [live with their kids] were less involved with parenting activities.”

This is not encouraging news for the state of fatherhood in America, and reflects the theme that NFI has been driving home for at least a decade – that it is the best of times and the worst of times for fatherhood in America. Essentially, this new survey does not tell us anything we don’t generally know already – fathers who live in the same homes as their children are more involved than ever, but there are also record numbers of children living in father-absent homes, and they generally have very limited contact with their fathers.

Putting the AP’s spin aside, this survey is why NFI is doing the work we are doing – providing community-based organizations around the country (such as military bases, prisons, Head Starts, etc), with the tools and training they need to help fathers connect with their children, regardless of their living arrangements. Moreover, we work to engage the culture around the importance of fathers in children’s lives so that we can start to rebuild a “culture of responsible fatherhood” that values the irreplaceable contributions fathers make to child well-being.

What do you think of the new survey’s results? Were you surprised by them?