Posted by Christopher A. Brown January 31, 2023
The Value in Customizing a Fatherhood Program
There’s a lot of emphasis these days on implementing fatherhood programs with fidelity. Indeed, many funders of... END_OF_DOCUMENT_TOKEN_TO_BE_REPLACED
Posted by Ave Mulhern January 24, 2023
A Few of My Favorite Things… and they are FREE!
Posted by Christopher A. Brown January 17, 2023
How Father Involvement and Bi-Strategic Parenting Positively Affect Children’s Brain Development

The Hidden Costs of Dysfunctional Families

I have achieved much in my life and some don’t understand this, but I am an under achiever. Why I consider myself an under achiever lies in fact that I was unable to completely overcome the impact of my upbringing. This is my story.

Others would have reacted in differing ways depending on the nature of their character. But everyone is impacted by their parents, both positively and negatively. 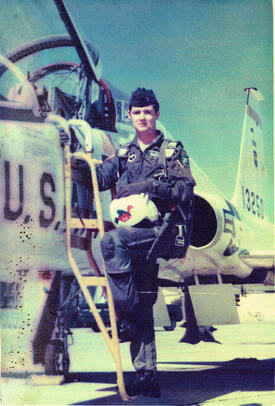 My family was a victim of alcoholism and little education. I am the oldest of six children raised mostly by my mother alone. She struggled mightily to raise us and had little time for nurturing. Of the six of us, I struggled the least. But my determination to escape from my lifestyle was hampered by my low self-esteem and shyness.

I achieved by studying hard to win a need-based, academic scholarship to a Washington University in St. Louis. I under achieved because I did not learn to fit in on campus. I did graduate with a degree in Electrical Engineering, but with mediocre grades. I found out later that my fellow students got together quite often in their dorms and elsewhere to study and review past tests. That might have helped me had I gotten out of my shell. But I was intimidated by my peers and failed to get to know them, something that now seems foolish.

Wanting to be an Air Force pilot, I joined Air Force ROTC while in college. Upon graduation I went to USAF pilot training in Del Rio, Texas. My class consisted mostly of graduates from the U.S. Air Force Academy. These young men had been together for four years and were very accustomed to the military way of life. I, on the other hand, came from a home life where we moved three times a year with siblings who were in and out of trouble. Instead of being molded by the military, I was molded by chaos.

While the Air Force treated me as an equal to these Academy graduates, I lacked the confidence needed to be a top-flight pilot and officer. I didn’t feel like I belonged. Instead of diving into every aspect of flying, instead of focusing on improving my weak areas, I was numb. I thought I was trying hard, but I really wasn’t. I never learned how to prioritize or ask for help.

A Kick in the Butt

I failed a training flight one day because, as I was approaching the runway for a landing, I did not put my landing gear down! This I failed to do while the warning siren was screaming in my helmet. My instructor waited as long as he could then told me to go around. We ended the mission and I thought my flying career may be over. In light of this embarrassing flight, and wanting to prove my worth as a pilot, I did something that I had not been doing with this great opportunity. That night, I went over the landing pattern procedures in my head, over and over again. I sat in a chair with a pretend stick and throttle in my hands. I drummed every procedure, every visual key, and every step into my head.

Two days later I had to repeat this flying lesson. My instructor was blown away! It was the best I had ever flown! The extra work, focus, preparation, and visualization proved to be all I needed to succeed. Why I hadn’t worked this hard before I still don’t understand completely. However, my failure in the previous flight was like a kick in my butt to do better. I realize now what was missing from my childhood. No one ever kicked me in the butt (or encouraged me) to do better. What I accomplished was on my own, but it always fell short of what I could accomplish.

When the T-37 phase of my training completed, I was at the bottom of my class. But after we moved on to the T-38, a sleek, white and thrilling jet to fly, I ranked in the top quarter of my T-38 phase. The lesson of applying myself more had helped me and I was able achieve my goal of earning my wings. However, I under achieved again because I could not choose the aircraft I wanted to fly due to my lower class ranking, caused by not working hard enough in the T-37.

The lesson is that not every casualty of a dysfunctional family is obvious. Some “success” stories mask what could have been even bigger successes. Families should be slingshots, throwing children into the world prepared for what lies ahead. Unfortunately, the problems of dysfunctional families are like anchors, dragging down their potential, and too many people succumb to their disadvantages rather than fighting to conquer them. I did fight to conquer them. But much of my energy was spent on catching up to where I should have already been. I finally caught up twenty years ago. However, I was past my prime and I wonder what more I could have accomplished with a little more kick and confidence. Although I totally love my standing in life now, it was too long of a growing period.

Every parent must encourage determination, criticize with love, support through failure, and reward successes, because some of our children will not fully succeed without it. It takes two parents to have the time and energy to do this properly. We must eliminate any incentives or circumstances for a family to break apart. I know that is an impossible goal for all families, but it is possible for some. Every family, and every child, counts.

This is a guest post by Michael Byron Smith. Michael blogs at Helping Fathers to be Dads. Interested in blogging for us? Read our guest blog guidelines.