Posted by Christopher A. Brown January 31, 2023
The Value in Customizing a Fatherhood Program
There’s a lot of emphasis these days on implementing fatherhood programs with fidelity. Indeed, many funders of... END_OF_DOCUMENT_TOKEN_TO_BE_REPLACED
Posted by Ave Mulhern January 24, 2023
A Few of My Favorite Things… and they are FREE!
Posted by Christopher A. Brown January 17, 2023
How Father Involvement and Bi-Strategic Parenting Positively Affect Children’s Brain Development

That's the conclusion William (Bill) Macchione came to after he used National Fatherhood Initiative's 14 Critical Issues to Discuss with Moms guide to help him create questions for a focus group he conducted with single moms. 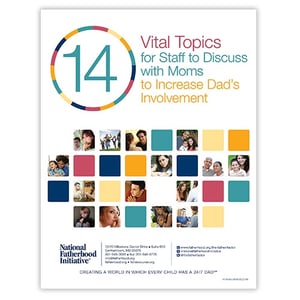 Bill coordinates the Summit County Fatherhood Initiative, a unique position within the Summit County Department of Job and Family Services created 14 months ago that developed from a consulting arrangement Bill had with several funders in the county to bring together father-serving providers into a broader, coordinated countywide effort. Bill doesn't facilitate a fatherhood program or directly serve fathers. Instead, his entire focus is to support direct-service providers and practitioners to serve dads. Specifically, he:

Bringing Communities on Board

​After getting his feet wet with a focus in Akron, the county seat, Bill has targeted four communities, one in each of the four corners of the county, to plant the seed for fatherhood programs. He has used a specific tactic in each county. He first approached the superintendent of schools because of the central role schools play in every community. He explained that superintendents tend to be very well connected to other leaders in the community. They also tend to be in touch daily with the effects of father absence on children, families, and their community. He worked with each superintendent to bring other leaders and direct-service providers together to form a committee to plan exactly how each community would get fatherhood programs in place.

​The Role of the Guide​

​In addition to approaching school superintendents, Bill also approached two other entities in each community--the local housing authority and Head Start program--because of their connection to so many of the families affected by father absence. And herein lies the role of the 14 Critical Issues guide in his work.

​When Bill started to work with the housing authority in Twinsburg, a town of around 20,000 in northeast Ohio 25 miles southeast of Cleveland, he learned that women--many of them single moms--made up nearly all of the residents in the complex run by the authority. Given that this gender dynamic was unusual among the housing authority complexes he'd encountered, he realized he'd have to engage the moms to engage the dads. He ordered the 14 Critical Issues guide to help him and a local fatherhood practitioner develop questions for a focus group they conducted with moms to identify ways they could encourage the moms to get dads more involved in their children's lives. More specifically, they also wanted to engage the moms--to show they cared about the moms and their children--so the moms would serve as a recruitment channel for getting dads into a fatherhood program.

To identify specific questions, Bill and his practitioner partner honed in on the following topics in the guide they thought would especially engage the moms and show how much they cared about the moms' perspectives:

Sure enough, this tactic worked. They had a great discussion that helped the moms see the importance of involving dads and address some of the difficult feelings they had about the dads of their children. Some of the moms recruited their children's dads into a 6-week fatherhood program.

As I've contacted organizations and practitioners that have ordered this guide for moms--and its sibling resource the 17 Critical Issues to Discuss with Dads guide--I've been heartened and, at the same time, disheartened. The reason is while some folks have used the guide for the purposes we created it for--and other creative ones like Bill's--far too many people order it and don't even download it let alone use it. You see, after someone orders the guide, they immediately receive an email with a link to download it. Some folks don't download it and, when they do, let it sit unused on their hard drive or somewhere "in the cloud." A resource bought and not used is, to be blunt, a waste of money. (To be fair, some folks I spoke with and haven't used it have definite plans on exactly how they'll use it.)

Ironically, I've often told staff at NFI that to fulfill our mission we must get as many of our resources into as many hands as possible. Now I realize we also need to do everything we can to "activate" those hands.

So if you've ordered the guide or plan to order it, which I certainly encourage you to do, here's a friendly reminder about the many of its fantastic uses:

All of us at NFI look forward to partnering with you to encourage moms to involve dads using this flexible guide and our other resources for moms.

Have you acquired the 14 Critical Issues to Discuss with Moms guide?

If so, have you used it?

If not, what are you waiting for?