Posted by Christopher A. Brown January 31, 2023
The Value in Customizing a Fatherhood Program
There’s a lot of emphasis these days on implementing fatherhood programs with fidelity. Indeed, many funders of... END_OF_DOCUMENT_TOKEN_TO_BE_REPLACED
Posted by Ave Mulhern January 24, 2023
A Few of My Favorite Things… and they are FREE!
Posted by Christopher A. Brown January 17, 2023
How Father Involvement and Bi-Strategic Parenting Positively Affect Children’s Brain Development

New Orleans Group Teaches Fathers How to Be Dads

Writing for New Orleans Public Radio, Eve Abrams reports on a group called NOLA Dads who is reaching the community by training fathers to be better dads.

Abrams points out that since 1986, a group called Family Service of Greater New Orleans has offered many services to the community including mental health counseling and training. Why are we telling you about this great work? Because they recently added a class called NOLA Dads. 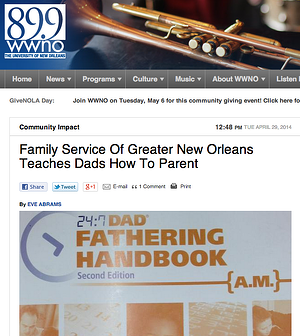 Abrams interviewed Lawrence, a father trained by NOLA Dads using NFI's 24/7 Dad® Program. Lawrence is a new dad. Listen to the audio of Eve's interview with Lawrence here. I found it touching to hear the genuine response from Lawrence when Eve asks what he's learned from the program that can connect him to his daughter.

His response, "I tell her things," he continues by explaining that he tells his daughter:

“You're important. You're sweet. You're kind. I love you...and then I repeat it about five times. That’s what I do. I do it all the time. Even when she's asleep.”

Wow, I've worked at NFI for two years. I'm still surprised by this statement. The complex made simple, right? While it's Lawrence who's attending the 24/7 Dad® training, it sounds like he could teach us dads a thing or two about what's really important.

Once a week, Lawrence takes a class on how to be a dad. It’s called NOLA Dads; and much like the training that's happening in San Diego, New Orleans is changing the community by addressing the problem of father absence.

Lawrence says of the program:

“I’m glad I’m in here, because you know I’ve never been a daddy so I need to learn what I need to, learn to do what I got to do, to be able to be there...might not have money, might not be able to fat up with gifts, but as long as love and caring count, I’m all about it. So there’s a whole lot more that I can learn.”

As part of the Orleans Parish Sheriff’s Office, Lawrence attends the NOLA Dads class at a local center. The program is part of a bigger campaign to reduce recidivism for ex-offender's on probation and parole. The fatherhood training deals with all things related to parenting including communication, anger management, employment and education.

"Because society places us in a certain kind of role, so it's kinda hard for us to say, 'Look I need help,' because we don't want to be looked upon as weak or afraid or less of a man...I find that us as males, we want help but we don’t want to be looked upon in a certain kind of way for asking for it...I mean, I’ve never been asked about how do I feel as a man about anything. Basically just suck it up, tough it up, and make it happen. As opposed to the other side of it: changing my thinking so I can be better and do better things for myself, family and community.”

Listen to the audio and you will hear, Carter, the facilitator, start class by asking the dads about parenting. After Carter asks the class, "What's three things you can do today to help your child do well in school?" Another dad in the program, Joseph, answers:

“My first one is help him every day with his homework when he comes home...reward him for the good things he is doing in school, and the third one to like stay up on him, make sure I stay up on him so he can do the right thing. Because once I let off he may take off and go the other way. So keep that in there."

Listen closely and you will hear Carter reply, “I tell you some other ways too. Let your kids see you actually doing the things that they do in school. So when your kids come home and never see you read or anything, and you tell them to read, why would they want to read?”

“They want to do what their parents are doing," says Joseph.

Eve reveals upon leaving the NOLA Dads class, she asked Joseph, a dad with a young son, if there was anything else he wanted her to know. His reply?

“NOLA Dad is a great program...it’s helping me to succeed with my child and teach him better, give him that structure that I wasn’t given.”

We couldn't ask for anything more when it comes to serving fathers with our 24/7 Dad® program.

Click here to learn more about the 24/7 Dad Program® and download our free guide to getting started.