Posted by Erik Vecere November 22, 2022
Learn How A Crucial Partnership Will Open The Door to Reducing Child Abuse and Neglect
Imagine my excitement when I received word that an organization called SCAN (Stop Child Abuse and Neglect) wanted to... END_OF_DOCUMENT_TOKEN_TO_BE_REPLACED
Posted by National Fatherhood Initiative November 15, 2022
Equipping Fathers and Organizations to Be More Father-Inclusive with Christopher Brown
Posted by Melissa Byers November 9, 2022
Trauma-Informed Care for Fathers and Families [Training + Free Resource]

As the nation’s #1 provider of fatherhood skill-building programs and resources, NFI provides guidance for practitioners and organizations on how they might be able to use to use the latest research on human behavior to enhance the effectiveness of their work with fathers. 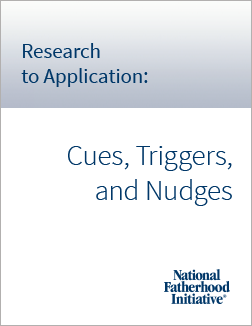 NFI provides this guidance in a series of blog posts called Research to Application: Guidance for Practitioners and Programs. The series is also available in the form of quick reference guides that you can download by clicking on the button at the end of the blog posts.

The series offers a platform for generating dialogue among NFI, organizations, and practitioners on ways that research can be applied to addressing pain points in serving fathers. This post is the first one in the series and provides ideas on how you might integrate research on cues, triggers, and nudges. Integrating this research could make it more likely that fathers will habitually participate in a service, workshop, or program. It could also help fathers develop the habits of good fathering above and beyond reliance on the resources (e.g. programs/curricula) you might currently use.

The Research
Research on power of habits in our lives, how to create word-of-mouth marketing, and how to create small and large-scale initiatives that improve decision-making provides insight into how organizations and practitioners might be able to use cues, triggers, and nudges to improve the effectiveness of a service, workshop, or program for fathers.

Ideas on Application
As Duhigg points out in The Power of Habit, it is easier for someone to establish good habits, and change poor ones, when part of a group (community). One reason why groups are so powerful in helping people to change behavior is that they help people see that change is possible (e.g. they see that it happens in others like them), which then makes it easier to believe that change is possible. Belief in the ability to change is critical to change. If you have seen fathers change as a result of participating in a fatherhood program, you know firsthand the power of groups.

Cues, triggers, and nudges are very similar in that they involve the influence of stimuli in the environment—stimuli that in some cases already exist while in other cases they’re “introduced”—on individual behavior. They involve influencing the behavior of individuals that are part of a defined group (e.g. a customer segment or fathers). And, perhaps most importantly in working with fathers, they can involve influencing behaviors that individuals repeatedly perform. So for the purposes of working with fathers, the minor distinction between cues, triggers, and nudges is not important, even though it’s helpful to understand the distinction.

Here is a list of ideas for integrating cues, triggers, and nudges into a service, workshop, or program that could help you address two major pain points—retention of fathers and consistent involvement of fathers in their children’s lives. Think of ways in which you could apply these ideas to each pain point.

Regardless of how you apply cues, triggers, and nudges, approach your effort as an experiment. Keep track of what works with fathers in general and with specific kinds of fathers (e.g. custodial and non-custodial) so that you can apply what works in future work with fathers one-on-one or in groups, and avoid what doesn’t work. And last but not least, share your results with NFI at info@fatherhood.org so that we can improve future versions of this guide.

Resources
As you consider using cues, triggers, and nudges to improve retention and fathers’ involvement in the lives of their children, review the following resources:

Don’t forget to look for more posts and reference guides in this series!